As we drive to church on Kamehameha Ave., my mother complains the candidates who lost in the Primary should take down their yard signs and banners, especially those who posted illegally on public fences and walls.

Following the August 13th primary election, advertisements during the news are back to Hawaiian Electric keeping the lights on (don’t think about your bill going up), Marcus Mariota at a lū‘au (the Atlanta Falcons starting quarterback assures you First Hawaiian Bank is local), promotions for the weekend college and professional football games and other local businesses making similar be happy pitches instead of Jill Tokuda likes guns and Sylvia Luke is a crook. Reporters cover parades and proclamations for little league championship teams, and how long the TSA lines are mid-day at Kahului Airport.

We’ve heard some lamenting about the ugliness of those third-party ads in the primary but I’ve also heard folks arguing there’s always been some whisper campaigns—using the coconut wireless in the past but now augmented by social media and television. But is there some common view of how we should conduct public debates and elections?

If civics is still taught in schools, there should be some mention of how some American ideas underpinning our republic trace back to England (or if you believe the Declaration of Independence, rooted in the mother country’s exploitation—meticulously listed by Thomas Jefferson—of its American colonies). Of course, our rights and institutional frameworks are in a written constitution while the English, the talking heads assure us, just know what makes up the British constitution (a mix of Acts of Parliament, court decisions and conventions and practices). The English speak of two aspects of its constitution—the “efficient” or functional portions and the “dignified” or symbolic. In more recent years, we arguably have seen an erosion in the unwritten practices in our democracy, most notably civil debates and the assumption of a peaceful transition of power following an election.

But following the recent passing of Queen Elizabeth II, we’re being reminded how much Monarchy Envy the heirs of the American colonies still feel for the royals. The United States was the first of the British colonies to leave the empire, fighting (and winning) two wars against the English. The British even burned down the President’s residence during the War of 1812. Now, after bailing out Great Britain in two World Wars, political leaders from both nations refer to the “special relationship” between the two countries.

I suppose the fascination with the British Monarchy can be forgiven more readily locally.

Hawai‘i is the only State that was once a monarchy, and some of the later Kings and Queens were decidedly anglophiles in their royal trappings and institutions.

Many local institutions trace their origins to the Kingdom of Hawai‘i and interactions with England (I’m not even touching James Cook running into the islands and titling them for the Old World as the Sandwich Islands for one of his patrons).

The Episcopal Diocese of Hawai‘i traces its origins to King Kamehameha IV and Queen Emma inviting Queen Victoria’s Church of England to the kingdom, supporting its establishment with various land grants. The Union Jack became part of the Kingdom’s flag and remains part of the State flag.

The sun never sets on the British Empire referred to the geographic scope of its colonial borders. Hawai‘i during Kamehameha III’s reign briefly fell under the control of the English during the so-called “Paulet affair.” British Admiral Richard Darton Thomas would arrive and overrule Paulet, restoring sovereignty over the islands to its monarch. Commemorating Admiral Thomas’ action, Kamehameha III said, “Ua Mau ke Ea o ka ‘Āina i ka Pono,” which has been adopted as the Hawai‘i State motto.

Ironically, Hawai‘i would eventually become a possession of the United States, after a revolution overthrew the island monarchy. Local residents can surely appreciate the legacy of colonialism that the English monarchy still symbolizes. Do children still learn about “manifest destiny” in our schools and whether some of its assumptions can be traced back to England?

Over the last weeks, we’ve seen the English display dignified parts of their constitution that have not been observed in seventy years, and they did it well. Americans do it formally every two or four years and lately we have not been very good at observing and protecting the symbolic aspects of our constitution.
God Save the King. 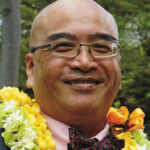 Gilbert S.C. Keith-Agaran practices law in Wailuku. A Maui High School graduate, he attended college in Connecticut and law school in Northern California. Unopposed in the primary election, he recently won another four-year term as the State Senator for Central Maui.