No Filipino has been on the Appellate Courts since Justice Simeon R. Acoba, Jr.

I have the disadvantage of not being a former law clerk. I’ve never worked in a court. Some of my friends interned while in college or law school for judges. After law school, I went straight to work at a Honolulu law firm. A lot of what goes on in the Judiciary is as much a mystery to me as other residents without a law degree.

Last year, I provided some remarks recognizing the service of retired Justice Simeon Acoba, Jr. At the time, he was “retiring” from service on the Hawai‘i Access to Justice Commission. This Commission was established on May 1, 2008 by Supreme Court Rule 21, with the purpose to substantially increase access to justice in civil legal matters for low-income Hawai‘i residents. This mandate was a major development marking a heightened movement to improve access to justice by institutionalizing the aspirational goals that justice must be extended to every resident of Hawai‘i regardless of economic, social, cultural, linguistic, ethnic, age, geographic or other barriers to equal access to the civil justice system.

This Commission held its first official meeting on July 23, 2008 and since its inception it has operated as a platform for proposing, initiating and evaluating expanded access to civil justice across different constituencies while facilitating improved coordination and collaboration among service provider and partners. After leaving the Supreme Court of Hawai‘i, Justice Acoba continued a life-long devotion to public service by accepting continued appointment to the Commission.

Justice Acoba started his legal career as a law clerk to Chief Justice William S. Richardson. From there, he served as a special assistant to the University of Hawai‘i President Harlan Cleveland in 1970 and later served as a Deputy Attorney General for the State of Hawai‘i in 1971 before entering private practice from 1973 to 1980. While in private practice, Justice Acoba served as special counsel to the State Division of Occupational Safety and Health, the Campaign Spending Commission and the Hawai‘i Public Utilities Division. He also served as a majority attorney for the Hawai‘i State House of Representatives and later served as an adjunct professor and instructor at the University of Hawai‘i School of Law and Hawai‘i Pacific University. 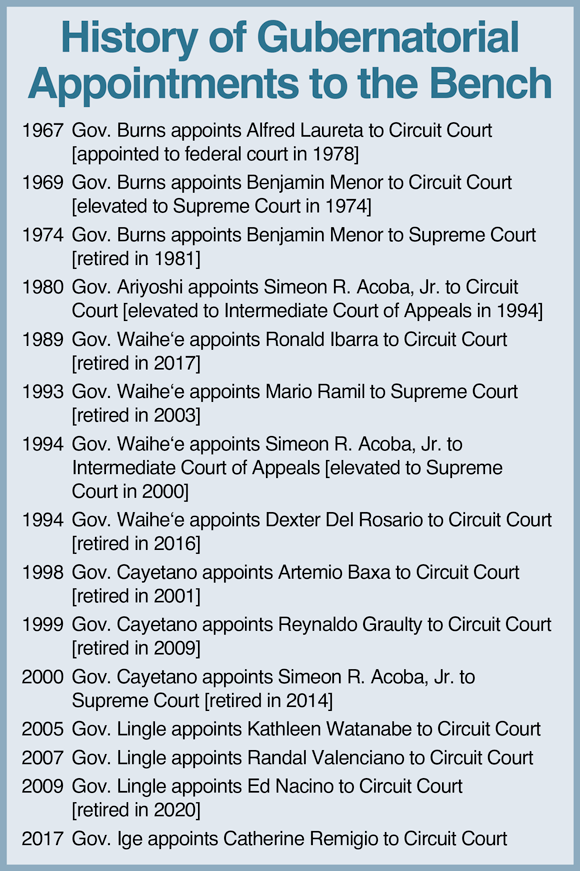 Acoba began a judicial career in 1979 when Chief Justice William Richardson appointed him as a per diem Judge in the District Court of the First Circuit. Eight months later, Governor George Ariyoshi picked him for the Circuit Court of the First Circuit where he served for fourteen years, from 1980 to 1994. He was only the third Filipino to serve as a Circuit Court Judge (the others were Alfred Laureta, appointed by Governor Burns in 1967, and Benjamin Menor, appointed by Governor Burns in 1969). In May 1994, Governor John Waihe‘e appointed Acoba as an Associate Judge of the Intermediate Court of Appeals (ICA) where he served for six years (Acoba remains the only Filipino to have ever served on the ICA). Then in May 2000, his former office mate, now Governor, Ben Cayetano placed him on the Supreme Court of Hawai‘i where he served with distinction as an Associate Justice. He sat on the court for fourteen years, until reaching the mandatory retirement age of 70 in 2014. The only other Filipino Justices were Benjamin Menor, appointed by Governor Burns in 1974, and Mario Ramil, appointed by Governor Waihe‘e in 1993. No Filipino has sat on either the ICA since he left that court or the Supreme Court of Hawai‘i since his retirement.

After 35 years of leading the administration of justice from the bench, Justice Acoba remained regarded as one of Hawai‘i’s most prolific jurists for his well-articulated opinions reflecting wisdom, experience and devotion to advancing justice and the rule of law.

Justice Acoba served twelve extraordinary years on this Commission, enhancing equal access to justice throughout Hawai‘i’s judicial system. Serving since its inception in 2008, Justice Acoba was integral to practically every initiative involving access to justice considerations and oversaw many of our significant statewide initiatives. As a founding member of this Commission, his leadership and foresight were invaluable to its formation and in directing its earliest achievements which demonstrated impressive and real progress in providing practical solutions to the ongoing challenge of improving access to the civil justice system.

Under his leadership we achieved significant results which included:

• establishing the cornerstone of access efforts—opening Self-Help Centers and Access to Justice Rooms in each judicial circuit where self-represented litigants can receive free legal assistance from volunteer attorneys;
• the promulgation of model pro bono policies to encourage increased pro bono participation; and
• amending Rule 23(f) of the Hawai‘i Rules of Civil Procedure, to authorize the distribution of residual funds left over in a class action lawsuit to eligible organizations from the Indigent Legal Assistance Special Fund.
After retiring from the Supreme Court in 2014, Justice Acoba remained an active Commission member. Later in 2016, he was appointed Chair of this Commission, where under his leadership we continued to initiate, develop, implement and support measures to enhance equal access to justice throughout Hawai‘i’s judicial system. Since then, some initiative include:
• additional resources for Self-Help Centers and Access to Justice Rooms—in light of the COVID-19 pandemic, volunteer attorneys currently provide remote legal assistance by telephone;
• the Hawai‘i Appellate Pro Bono Program which assists self-represented litigants with certain civil appeals by matching them with volunteer attorneys willing to provide free legal services;
• the Volunteer Court Navigator Program permanently established for the Second Circuit to help self-represented litigants understand court procedures in landlord-tenant, debt collection and non-family temporary restraining order cases; and
• ongoing development of a transformative Legal Navigator portal, an online legal services portal that will utilize Artificial Intelligence to help people identify legal problems and access critical resources.

In 1990, when Justice Acoba was renewed for a second term as a Circuit Court Judge, out of the sixty-eight Judges statewide, there were only three Hawai‘i judges of Filipino ancestry: Circuit Court Judge Ronald Ibarra and District Court Judge Joseph Florendo, both on Hawai‘i Island. Our very small cohort of Filipino lawyers organized a dinner to recognize the three sitting judges along with recently retired federal judge Alfred Laureta, with a goal to increase the presence of Filipinos on the bench. A few years later, Governor Waihe‘e named Mario Ramil to the Supreme Court and then Simeon Acoba to the ICA. Governor Cayetano would later elevate Acoba to the high court where for several years, two Filipino Justices out of five would serve.

No Filipino has sat on the ICA since Judge Acoba left. With two recent chances to pick a Filipino for an ICA vacancy, Governor Ige passed on selecting the only Filipino on the list, Lance Collins.

Similarly, no Filipino has served on the Supreme Court since Justice Acoba retired with Governor Ige passing on selecting either Darolyn Lendio Heim or David Forman who were both on the list in the fall 2020.

Gilbert S.C. Keith-Agaran represents Central Maui in the State Senate. He formerly served as chair of the Senate Judiciary Committee which includes as one of its responsibilities the duty to hold hearings on judicial appointments.