Aloha! Mabuhay! Welcome back! How was the adobo last night? Was it Nasinga (Na-Seeng-nga) (It’s delicious in Ibanag)? Or was it Maalat (Mah-ah-lot) (It’s salty in Pilipino and Ilonggo)? Or was it Masarap (Mah-sa-raap) (delicious in Pilipino)? Well, whether it was salty, sweet or spicy, at least you can say it in Filipino now. I’m here to help you to master your Filipino vocabulary. So Let’s Talk Pinoy!
My brother Jeslie celebrated his 43rd birthday on the 4th of this month. My mom cooked Chicharon (Also known as Lechon Kawali, or Crispy Pork). Thank God it wasn’t Parat ni (Pah-rut nee) (Salty in Cebuano). Of course, what is a birthday party without pancit for Filipinos, right? The pancit that was cooked by my sister Dianne was Ay kanamit (Aye KAH-na-mitt). (It’s delicious in Ilonggo.) But the tuxedo cake from Costco that my five-year old nephew Zion picked, was really matamis (MAH-tah-miss) (Sweet in Pilipino). There goes my diet. Nabsug-ak. (Nub-soog-ak) (I’m full in Ilokano). Dacal a salamat for the grindz (DAH-kal AH SAH-lah-maat) (Thank you in Kapampangan). 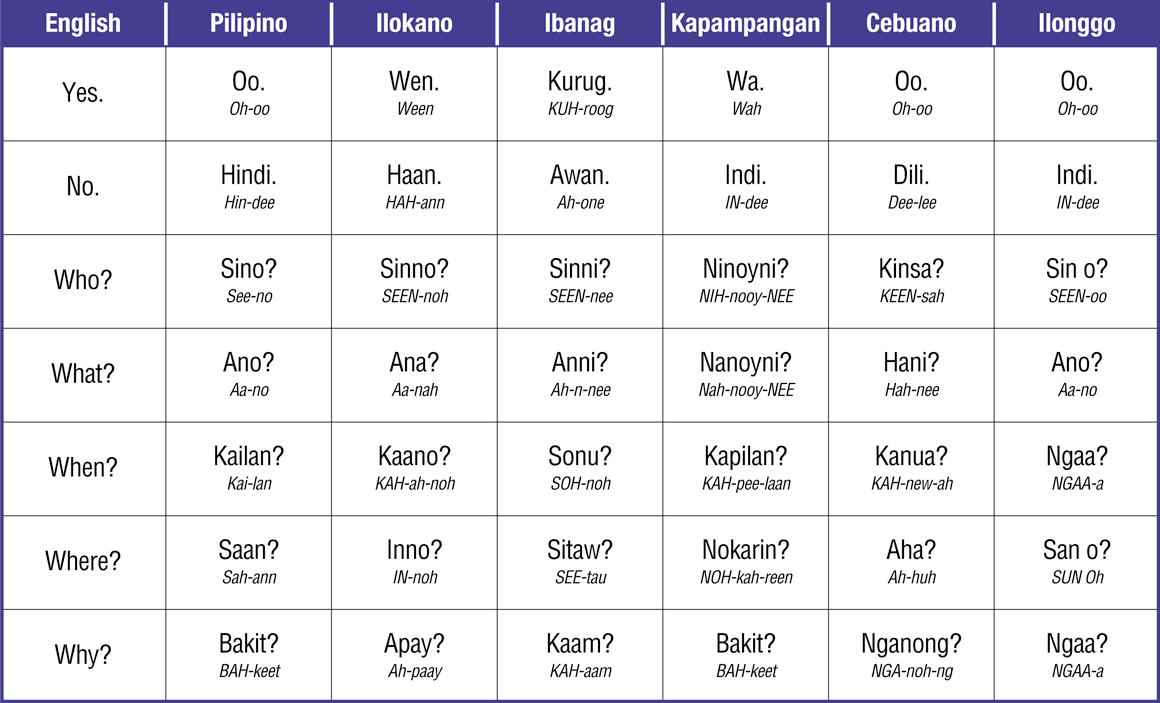 A man enters a bar and sees a beautiful woman sitting by herself. He orders a drink and can’t stop glancing at her. She catches him staring and smiles. In sheer embarrassment, he turns away and gathers his thoughts. With his chest pounding and palms sweating, he musters up enough courage to get up to walk over and talk to her.

Man: “Kumusta, ako si Michael, is this seat taken?” he says in a cracking voice.
Woman: She smiles, “Hindi. Bakit?” (Why?)
Michael: “Wala lang.” (Nothing). “Is it okay to sit with you for a while? I’m waiting for a friend.”
Woman: “Oo, just for a while though, I’m waiting too.”
Micheal: “Anong pangalan mo?” (What is your name?)
Woman: “Sino? Ako? Angel. Nice to meet you, sir.”
Micheal: “Sir? I’m not that old haha. Angel, Taga saan ka?” (Where are you from?)
Angel: “Taga Makati po.”
Michael: “Makati? Saan yun?” (Where is that?)
Angel: “A city in Metro Manila, they call it the land of the soda pop,” she says with a giggle.
Michael: “Talaga? So, do you know what happens if you drink a dozen soda pops?”
Angel: “Hindi. Ano?”
Michael: “You burp 7-Up.”
They both laugh.
Michael: “Angel, kailan ka pumunta dito sa America?” (When did you come to America?)
Her phone vibrates and she reads her text message.
Angel: “Sorry, Michael, my ride is here. Nice talking to you, I have to go now, bye.”

Did you figure some of the conversation out by yourself? Often, English is mixed with Filipino, like in this case Tagalog, and makes for a dynamic conversation called Tag-lish. Filipinos learn two, even three languages, so don’t be afraid to try it. Well, it looks like Michael just ran out of time. What do you think he is going to do? She is about to walk right out of his life before it even begins. Find out next time when Michael says something he might regret tomorrow! So, here is your homework. Go out and practice saying “yes” in Filipino to 20 people today! It’s been fun, stop on by next month and let’s laugh, let’s listen, and Let’s Talk Pinoy!