Aloha August, welcome September, the first ’ber month and you know what it means. It means time will pass by so fast the next thing you know, holidays are here and the year is gone.

Shout out to all the September babies! We have the most birthdays in this month! Do you know why? Because it’s cold in December when they were conceived. Happy birthday to Keilah and Deja (1st), Mana (6th, our fur baby), Arissa Kira (7th), my cousin Mando Domion (13th), Debbie and Julia (17th), my Aunt Imelda Ulep (18th), to my mom, Dolly (21st). Also, a shout out Happy birthday to our Maui State Senator Gil Keith-Agaran! Pada-pada kam nga kumablaaw ti naimbag nga panagkasangay yo amin! (Happy birthday to all!)

Michael screeches and tries to grab the magazine.

Swiftly Angel moves it just out of reach and they struggle on the ground.

Angel laughs and continues to tease him. He struggles to capture the magazine in her kamay (hands).

Rolling on the ground, the struggle quickly changes as Angel turns around with Michael on top of her with their mukha (faces) fronting each other.

Moving his gaze down to her labi (lips). He gives her a halik (kiss).

Uncle Ray fixes his buhok (hair) and places the phone headset back onto the phone base to end the call.

Uncle Ray is just twelve hours into his new promotion as Police Sergeant. He is masaya (happy), he finally gets to do what he wants to do. Missing career opportunities due to health issues and personal problems in the past led to him giving up promotions to tend to those issues. Otherwise, his 20 years in the department would yield him at least to a Lieutenant even in moderate scenarios. But here he is with his Sergeant title.

Looking at himself in the mirror, smiling. “Billy Ray Walker, Sergeant. Oh, that sounds so good,” he says to himself while winking in the mirror. Polishing his badge and tilting his cap a bit, he turns around and acknowledges an imaginary person. “No, it’s okay, you don’t have to be so formal and salute me. Hahaha. My name is Sergeant Walker, how can I help you?” he says with one eyebrow raised and his kamot (hand) extended to shake a lima (hand).

“Oh Katherine, don’t worry, I’m not going anywhere,” as he gives her a thumbs up. Ray has been secretly in love with Katherine for the past twenty-five years and was given the opportunity to work together ten years ago when she transferred to the Police Department from the Department of Public Works.

These two have been friends since grade school when first meeting out in the playground during recess. Katherine was a bit of a tomboy as she often used to play with the boys and do all the sport activities just as well. She wore loose fitting clothes, burped and laughed like a guy. Even to this day, you couldn’t say she was a girly-girl. Constantly making guy jokes and absurd innuendos. She could drink most men under the table and does amateur boxing a few weekends each month.

It was a hot summer afternoon when Ray was waiting for the school bus under the tree, twirling his pencil on his fingers. Suddenly he was struck pretty hard and someone fell on top of him. As he ate a bit of sand and opened his eyes, he naturally pushed the boy off him, proceeded to get up and rant. But to his dismay, the boy was actually a girl. She scrambled to control the ball and corralled it into her braso (arms). She held the football in both gamat (arms) and jumped up in the air and spiked it in the ground. “Yah! Let’s go!” Katherine screamed as in the distance you could hear a small crowd cheering. Laughing, she looked down at Ray and smirked. She gave a thumbs up and said “Eh, thumb-wrestle. You think you can beat one girl?”

Ray jumped up and dusted himself. He opened his ima (hand) and said, “Yeah, right! You have no chance.” They locked gamat (hands) and began the thumb-dance. “One two three four, I declare a thumb-war,” the two sang in sync. Instantly, Ray could feel the force and strength of Katherine. She instantly powered her way to a clean thumb pin on Ray. In complete shock and eyes wide opened, he demanded a rematch. She obliged. “One two three four, I declare a thumb-war.” This time Ray put up a heroic effort but the result was the same. A clean pin. She even kept the pin and looked into his eyes, which was filled with despair. Even though a girl not only knocked him down but beat him, no, she dominated him in thumb wrestling. As she let go of the hold, she walked past him and shoulder-bumped him, turned around and gave a thumbs up and walked away. 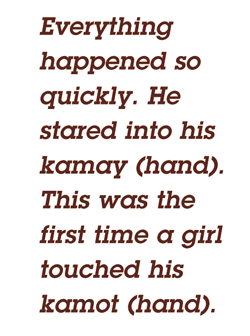 Everything happened so quickly. He stared into his kamay (hand). This was the first time a girl touched his kamot (hand). As he turned his head, he saw this tomboy running with the football pretending to be a running back. He smirked back at her and got on the bus.

The next day Ray was sitting in his usual spot near the bus stop under the tree. Looking around, he was looking for this mysterious girl. Constantly looking around but to his disappointment, she never came. Playing with a blade of grass and bending it into oblivion, he flicked it over his right shoe. Grabbing his bag and tossing it over his shoulder, he started heading to the waiting line for the bus. Suddenly someone bumped into him and it was Katherine. A gleaming tamisni (sweet) ngiti (smile) in her nawong (face), pearly white teeth, her buok (hair) was a mess and sweating. Hunched over she gripped his forearm and caught her breath. “Hey Ray,” she said while lifting her gamat (hand) with a thumbs up. “WrestleMania time. Let’s see if you got any stronger from yesterday,” she jabbed at him. Katamis (Sweet) isem (smile) from ear to ear, he is so naragsak (happy) to see her, you could see it in his rupa (face). He dropped his bag and fake spit into his ima (hand). And extended his lima (hand), “Hell yeah, rematch! I can’t lose again.”

“One two three four, I declare a thumb war,” they giggly sang. And the match was on. Katherine on the offense, as she always is the aggressor, she tried quickly to clamp on but misfire after misfire, she started to get sloppy. Ray, on the other kamay (hand) playing defense, never got into motion of attempting a pin since he was always running. She pulled him in close to her and he panicked. She pinned him and counted. “Seven, eight, nine.” Ray squirmed, pulled and jerked but just couldn’t move. “You have vice grip gamat (hands)!” he shouted as they both laughed. “Ten,” she finished the pin and released him. They both laughed as they stared at each other. Her mayumu (sweet) timan (smile) in her nawom (face) is so addicting. This was the moment Ray fell in love with Katherine. He was malipayon (happy) to spend time with her. For the next few years of grade school and the six years of middle and high school, they met every day after school to thumb-wrestle. Katherine dominated all through grade school but in middle school when Ray’s body started to fill out and he became a young man, he started to easily beat her, letting her win every so often. Currently the record is 1232-525 to Ray since many of those wins came in High School where he was a star running back. Those were the magayaya (happy) days in his life.

Katherine left to go to UCLA for college while Ray stayed on Maui, eventually getting into the police department. When Katherine showed up to work, they instantly hit it off and have been having lunch together every day. They no longer thumb-wrestle but their iconic thumbs up kamay (hand) gesture is something they always have together. As he passed Katherine, she gave him the matamis (sweetest) ngisi (smile). “Naimbag nga aldaw mo! (Good morning!) Go get ‘um boss,” she says. He yuhom (smiles) back and enters the conference room for the briefing.

As he closed the door, his Chief says, “Maayong buntag (Good morning) Ray, here is the new file.” On the table was a picture of Angel and the deceased cop and a manila folder with a WANTED on the tab.

Can you imagine Uncle Ray’s reaction? What is Uncle Ray going to do? How is he going to break the news to his favorite nephew?

Keep an eye for the next issue. Please visit us on our Facebook page and leave us a comment or ideas at https://www.facebook.com/FilAmVoiceMaui.