What is the relevancy of endorsements in our government’s elections today?

Culturally, politics is a Filipino blood sport. Just as basketball is the national sport of the Philippines and every Filipina should win a beauty pageant at some point of her life, picking your manók in an election is a matter of pride and insight. So here’s my take on what to think about this year and my picks for various offices.

But first, while there are people who claim they vote based on issues, many regular voters may not know exactly where a candidate lands on the ideological standpoint. In plantation days and from the early days of Statehood, party affiliation often substituted for specific information about a particular candidate—you voted for the Democrat if you supported expanded workers’ rights, fairer public education, stronger environmental protection, and creating broader social services and public safety net. During Plantation days and until the last twenty years or so, most residents had some link to sugar or pineapple or other agriculture.

It’s not as pure and simple today, if it ever was, where Maui has more limited economic engines, and an economy dominated by the Visitor Industry and some construction.

I consider what these candidates have contributed to Maui, both in office if they are incumbents, and to our way of life if they have not been in elected office. The old litmus tests have changed. You could consider in the old days what a person did in the Jaycees or at the County Fair as a measure of community involvement. Have they been active in Boy Scouts, or their church, or in a service organization (Rotary, Kiwanis or the Lions Clubs)? Do they coach their children and their neighbor’s kids in soccer or Little League or Menehune basketball or Pop Warner football? Have they been active in their children’s or their neighborhood schools? What kind of business are they in and how does that business contribute to civic life? Have they been involved in other local issues that make life better for the entire community?

Involvement beyond the run up to an election in some of the above probably means a person is in touch with our community and indicates that they’ll be committed to our community whether or not they are in elected office.

With the generational movement of Democrats into all facets of island society—including upper management in larger businesses and developers, affiliation with the party no longer is as clear cut a way of distinguishing between candidates. A lot of local Democrats with roots in the early days of Statehood likely remain very conscious about the need to provide and maintain jobs for longtime residents and their children who plan to live, play and raise families in these islands. Even labor unions often compromise with business and developers for the promise of continued employment opportunities for their members and their children.

For most folks, all the people running for the various legislative seats can be mysteries. Normal working folks may only know what happens through what they read or see in the mainstream media (print newspapers, television) or an elected officials’ newsletter or a candidate’s walking piece. Small kid time, my grandfather and his gamecock breeding friends would talk story about candidates and issues over cold adult beverages in the backyard. Today, it’s more what your “friends” post on social media (if you have time for Facebook, Twitter, Instagram, Tumblr, Snapchat, Pinterest or some other platform).

So endorsements by groups or individuals remains one avenue for differentiating between candidates.

While unions like the ILWU were an important part of the coalition that overturned the oligarchy and Big Five Republican coalition that controlled Hawai‘i during Territorial Days, the labor movement doesn’t hold the same esteem as it once did during the heady days of the Democratic Revolution. And some people openly blame unions as part of the problem for Hawai‘i’s social-economic challenges, ignoring the debt owed to the battles fought by unions for workplace safety and labor benefits enjoyed statewide today. However, Maui candidates generally still welcome support from the larger unions, especially the public worker unions (HGEA, UPW and HSTA) for money and people. Private sector unions like the ILWU, the Carpenters and the various trades (Operating Engineers, Laborers, Masons, Electricians, and Iron Workers) also provide endorsements and help with funding and sometimes grassroots help.

Candidates also work on getting support from people considered influential among particular groups—known leaders of community groups like churches, social or service clubs, chambers of commerce or non-profits, or even former elected officials.

Candidates still pursue these endorsements to get their name in the minds of voters affiliated with those unions or community groups. So it’s interesting to see groups being formed to simply make endorsements and to move out the folks they brand as the old boy network of elected officials. Many simply tout the shared vision of the slate being endorsed.

But perhaps the thing that gets left out from consideration is not what a candidate wants to do (or stop) but what they’ve contributed to the community in the past. I’ve come to see action, more than talking, as the better measure of how strongly a person feels about making a difference. Growing up, the lawmakers I recall on the County Council and legislature came from various parts of our islands: educators, retired police or fire fighters, small business owners and managers, union business agents, former county and state administrators, news reporters, independent newspaper publishers, farmers, disc jockeys and former beauty contestants, and (rarely) the occasional lawyer.

I would argue that what someone has done in maintaining and improving the quality of life for residents should be a primary consideration for those asking for our votes.
Ultimately, choices will get made based on our shared concerns.

In high school, I remember one election where a local candidate was perceived as proposing an anti-Filipino cultural ordinance (even after people moved from the camps to Dream City, folks would still do some backyard slaughtering and cooking). My grandfather, who occasionally supplied butchered beef to folks in our Pā‘ia neighborhood, or prepared fresh pork party dishes in his silyases (woks) when catering large parties, was pretty ticked off. When I went to help him vote that November, he said vote all the Democrats except the poor Councilmember blamed for the proposed law.

This upcoming election may further shift Maui (and Hawai‘i) from whatever plantation era consensus we shared as an island people. As reflected from the narrow approval of a County-level Genetically Modified Organism (GMO) regulation a few years ago to talk about shifting Maui from direct management by elected officials to contracted “professional” managers, some people are looking for changes (the current Mayor-appointed Managing Director Keith Regan actually holds a certificate as a professional manager).

Supporters of the anti-GMO initiative have now shifted focus to electing people who agree with their vision for Maui. They endorsed a slate of candidates for County and State office in 2016 and helped elect four of the nine members of the current Maui County Council. My own favorite slogan in recent elections successfully captures the general unrest. Part-Filipino Alika Atay’s signs declared “‘Nuff Already.”

‘Nuff Already succinctly captures the frustration a lot of people feel about life on Maui and the need for a change in direction.

This year, with two Council members leaving to run for Mayor, and Council chair Mike White and Vice Chair Bob Carroll choosing not to run for re-election, the same groups have an opportunity to elect both a Mayor and a Council majority that agrees with their brand of change. They also support a number of legislative candidates.

Council members run every two years County-wide but with residency in particular areas of Maui Nui to insure smaller communities like Lāna‘i, Molokai and Hāna have representation. Unlike Maui Council members, state legislators are elected only by voters who live in their districts and they run in Partisan Primaries (elections where voters choose a nominee for their particular political party).

Consider one big issue that affects everyone who lives and works on Maui. Did these candidates actively support ensuring Maui’s residents can continue to have acute care and medical services on island rather than having to fly to O‘ahu or the mainland? A lot of residents (and local health care professionals) actively worked to support the changes which did not happen overnight. Community members (many who would likely be card carrying members of the so-called old boy network) and Maui legislators like Roz Baker, J. Kalani English, Joe Souki and Kyle Yamashita worked hard to first extend more local control and management of the three public hospitals (Maui Memorial, Kula Hospital and Lāna‘i Community Hospital) and then to privatize management of those facilities. Creating the opportunity for a better Maui Health System required pushing back against strong public union opposition and O‘ahu indifference. Supporting that shift remains one of the main jobs for Maui’s legislative delegation. 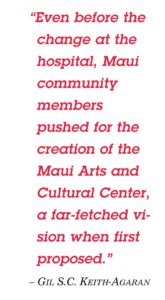 Even before the change at the hospital, Maui community members pushed for the creation of the Maui Arts and Cultural Center (MACC), a far-fetched vision when first proposed. Today, the MACC annually serves as a world class venue for concerts and as a stage for local performers. Over the years, the Center has expanded use to hosting high school band concerts and cultural festivals. The MACC was the vision of local real estate developer Pundy Yokouchi and has been supported over the years with additional State funding for additional facilities.
Another example would be the creation of the Maui Coastal Land Trust (now the Hawaiian Islands Land Trust). Out of public opposition to the proposed resort/golf course development of the old Waihe‘e Dairy lands, Maui residents preserved those lands by pushing for the purchase of the area by the land trust using federal, state and county funds. Today, the land trust holds conservation easements throughout Maui Nui and the other islands, and actively works to restore natural and native habitat on those holdings.

Based on the criteria discussed above and looking at what I know about the candidates, here are my own endorsements for Governor, Lt. Governor, the legislature and the County Council. For Governor I like