Legislative efforts before 2018 concentrated on moving the rate to $15.00. With the pandemic challenging the ability of some local businesses to attract workers to lower paying jobs, entry-level positions generally command more than the current minimum wage. The State Senate put forward a bill last session proposing a hike to $13.00 which the House rejected.

In early January, House Speaker Scott Saiki announced support for an $18.00 minimum wage, saying: “We had to defer the increase in the minimum wage during the pandemic, but now that conditions have improved, the House will propose to increase the minimum wage to $18.00 an hour.” While he had no details at the time, Saiki has since introduced HB2408. Raising the minimum wage was endorsed by the Governor, the Senate President and other legislators.

The Senate acted quickly on SB2018, with the Labor and Ways & Means committees hearing and the full Senate moving SB2018 to the House for consideration on January 28, 2022. Twenty-four of the twenty-five Senators voted in favor of the bill. Senator Brian Taniguchi, the main sponsor of the bill, wrote in the committee report: “[A] majority of credible studies conclude that higher minimum wages appreciably boost workers’ earnings with little or no effect on employment. A 2018 study by the U.S. Census Bureau found that raising the minimum wage benefits a large majority of low-income workers by putting them on the path to higher earnings in the long-term and decreasing income inequality.” Taniguchi further expressed “there is currently a significant difference between Hawaii’s minimum wage and what is needed to afford basic needs in the State. According to a report titled ‘Self-Sufficiency Income Standard—Estimates for Hawaii 2020’ issued by the Department of Business, Economic Development, and Tourism in December 2021, approximately 18.2 percent of two-adult couples with no children, and 34.7 percent of two-adult couples with two children had incomes below the self-sufficiency standard in 2020. For single-adult with no children, single-adult with one child, and single-adult with two children 43.1 percent, 50.0 percent, and 80.0 percent had incomes below the self-sufficiency level, respectively.” Taniguchi also pointed out, “despite the State’s high cost of living, according to the Department of Labor and Industrial Relations, twenty-two states and the District of Columbia have minimum wages higher than Hawaii.”

Taniguchi argued “incrementally increase[ing] Hawaii’s minimum wage to $18.00 per hour by 2026 … will raise the quality of life for Hawaii residents, reduce poverty, increase economic activity in the State, and appropriately address inflation and the resulting increase of the cost of living in the State.” The Senate Ways and Means committee report noted “as the minimum wage increases over time, the Department of Budget and Finance [should] ensure that all state employees be paid no less than the applicable minimum wage rate.”

SB 2018 now goes to the House for consideration and action.

The Fil-Am Voice checked in with a few small business owners on Maui on their reaction of raising the minimum wage to $18.00 per hour, including the president of Fil-Am Voice, Inc., Tante Urban, owner of Tante’s Island Cuisine at the Maui Seaside in Kahului who believes raising the minimum wage will impact small businesses. “An increase in wages and other costs of doing business means price increases to offset the cost increase. In my business any small price increase is noticed by the customers and many times they say something or question it. It’s like you’re getting more money but at the same time you’re spending more. Where do you find balance—higher revenue (wage) versus higher expenses (cost of living). When will it end?”

Roseminic Ulep, also a small business owner as a healthcare provider for the elderly and a transport provider for the disabled, looked at the issue of raising the minimum wage from both the employee and employer’s perspective: “From the employee’s perspective, I am all for it because the cost of living is so high like gas, shipping groceries, rent you name it, basically everything,” said Ulep. “We need to work two jobs just to be able to take care of our basic needs for our family. On the other hand, as a small business owner, pay rates has always been the issue. I have been working for the State of Hawaii for the whole time and we have been asking them for a raise since 2018 with myself and other providers testifying at the State Capitol for higher rates per patient and until now, there has been no increase. As little as what the State pays me per patient, I don’t know how I will be able to make it if the lawmakers will not balance out the equation. If the Legislature passes this bill for employees, I hope they will also consider the employer side. Many employers are paying cash just to stay in business. The lawmakers need to look at every angle to make it work for both parties.”

Joselito Yuzon, owner of Johnstone Supply Maui has a strong pro-employee perspective. “This bill is long overdue and should be passed as soon as possible. Honestly, 2026 is way too far for $18.00 to be realized; it should be by 2024. Maui is a very expensive place to live and employees deserve more than $10.10. They are the backbone of the company and they should be compensated fairly well.” 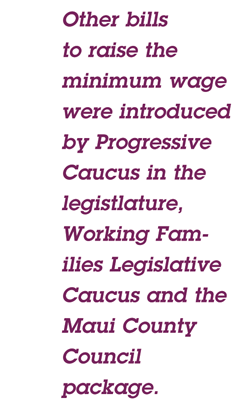 Other bills to raise the minimum wage were introduced by the Progressive Caucus in the legislature (HB1771 and SB2750), Working Families Legislative Caucus (HB1503 and SB2243), the Maui County Council package (HB1440 and SB2099). A minimum wage increase to $18.00 over eight years to 2030 is also in a House omnibus measure, HB2510 which proposes a number of changes to State policy: making the state earned income tax credit refundable and permanent; increasing and amending the refundable food/excise tax credit; increasing minimum wage and the tip credit through 2030; amending the household and dependent care tax credit to apply to expenses paid for the care of a qualifying individual, regardless of age and specify that a qualified individual is, among other things, a recipient or eligible to be a recipient of Social Security disability insurance; appropriating funds for an outreach campaign to educate low-wage earners about their withholding options and to provide support when completing their withholding forms.

Although the Senate acted quickly in passing SB 2018, since being received by the House, SB2018 has not been heard by the House Labor committee as of press time. 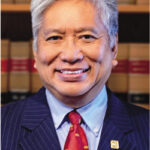 Alfredo G. Evangelista is a graduate of Maui High School (1976), the University of Southern California (1980), and the University of California at Los Angeles School of Law (1983). He is a sole practitioner at Law Offices of Alfredo Evangelista, A Limited Liability Law Company, concentrating in estate planning, business start-up and consultation, nonprofit corporations, and litigation. He has been practicing law for 38 years (since 1983) and returned home in 2010 to be with his family and to marry his high school sweetheart, the former Basilia Tumacder Idica. 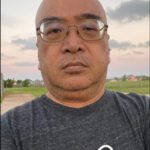