Earlier this year, Filipino nurses and Filipino doctors on Maui created their own separate organizations as a means to foster closer relationships, build networks, and engage in community service.

“We realized over the years that there have been more Filipino providers coming to Maui to work,” said Dr. Errol Buntuyan, the president of PhAMD. “We had been socializing on a small scale amongst different social circles but then decided to conglomerate the groups and spend time getting to know each other outside of our medical practices.” Buntuyan, who is Board Certified in Family Medicine, has been practicing for nineteen years, with the last twelve years at Kaiser Permanente’s Maui Lani Clinic. 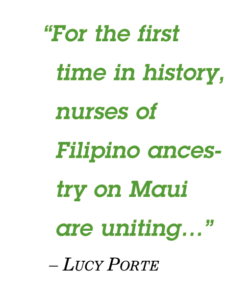 “For the first time in history, nurses of Filipino ancestry on Maui are uniting,” said Christina “Lucy” Porte. “Our mission is to uplift the positive image of the Filipino as a nurse, uphold the social welfare of its constituent members, promote and support professional excellence through education and community involvement, and contribute to significant outcomes for healthcare and society.” Porte received her Associates Degree in Nursing in 1972 and her Bachelor of Science in Nursing in 2010. She has been a Nursing Assistant Instructor for University of Hawai‘i Maui College since 2010 and retired from Hale Makua in 2014 after thirty-five years, including seven years as Director of Nursing Services.

Historically, the first Filipino doctor to practice on Maui was Dr. Jose Ligot Romero, who established his practice in 1965 at 99 Market Street in Wailuku. In 1972, Dr. Hilario Aquilizan joined Dr. Romero. Later, Dr. Marconi Dioso and Dr. Jose Chua-Chiaco joined them. (Unfortunately the identity of the first Filipino nurse on Maui could not be verified as of press time.)

Porte says PNAMHi started with thirty members but now has forty-one members. “We are actively recruiting membership of Registered Nurses, Licensed Practical Nurses, and student nurses,” she said. “I believe there are many nurses of Filipino ancestry on Maui. We have just touched the surface. Interest in becoming a member will increase as nurses of Filipino ancestry become more aware of our existence and benefits from the association. To become a member, Registered nurses may apply online through the PNAA website [www.mypnaa.org] or contact membership chair Mary Jean Guira, RN [385-0743] or membership co-chair Dionie Cabias, LPN [268-8615].”

The support to be provided by PNAA to PNAMHi was evident at the June 8 installation banquet attended by Erlinda Ferrer, president of the Philippine Nurses Association Hawai‘i (“PNAH”), and Madelyn Yu, president of the Philippine Nurses Association of America. Yu gave a brief history of how PNAA was formed after two Filipino nurses in 1976 were immediately imprisoned after being accused of killing ten of their patients. Yu explained how Filipino nurses started to organize and rallied behind the two nurses and supported them in their hearings. In 1979, nurses from five states formed an alliance and were instrumental in exonerating the two nurses and the alliance became the PNAA.

For the immediate future, both organizations intend to increase their membership. We will continue our “social networking and build our membership,” said Buntuyan. In her inaugural address, Porte humbly accepted the challenges as president and outlined the immediate plans: “We need to inform our fellow Filipino nurses of our association’s existence and its benefits.” Porte says PNAMHi will use its Facebook page [www.facebook.com/PNAMHi] to keep in contact with its members. “We have ongoing community outreach projects. We participated in the American Cancer Society Relay for Life and will also participate in the Health and Wellness Fair for Christ The King Church. We are also raising funds to help support our goals such as bringing the National Council Licensure Examination (NCLEX) review to Maui.”

The nurses want to “participate in the medical mission activities in the Philippines and support legislation and public policies locally or nationally which will favorably affect healthcare outcomes and the nursing practice,” added Porte.

Buntuyan explained although their initial purpose is networking, “One day we hope to develop into a more structured group addressing health care disparities within our Filipino community, providing mentorship to students seeking health care careers, and volunteering at local community events and health fairs.”