To Mom: Thank you for loving and caring for me. I love you.

Where are we in the story of Michael and Angel? Let’s find out. 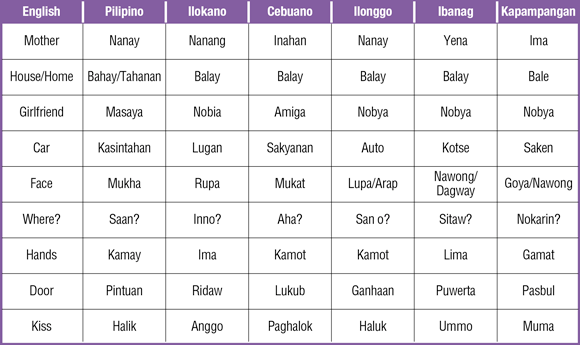 Michael begins to pull the grass. But his kamot (hands) slip and slide. He cannot pull out a single blade.

I have awan (no) power left. I need to wake her.

He opens the puwerta (door) with her pretending to sleep. He goes in to whisper in her ear to get up. She arakup (hugs) him and halik (kisses) his cheek.

Shocked about this, he collapses on her. She looks up at the silhouette of a cabin in the jungle under the illumination of the moon.

“Where are we?” Angel asks.

Michael is passed out on top of her on the passenger side of the vehicle. It is the middle of the darkened night and she doesn’t have the energy to push Michael off her nor does she really want to. Instead, she reaches for Michael’s nearby jacket that is peeping out of his backpack and covers him with it. She pulls him into her and wraps her arms around him as he unconsciously snuggles into her. She slowly gives him a muma (kiss) on his forehead and runs her gamat (hands) through his hair.

“Knight in shining armor huh? Fell a few feet short but I’ll take it,” she whispers to herself as she smirks herself to sleep as well.

“Grrr … Now’s not the time to ignore me, Mikey.” Ray murmurs to himself.

“Hello, Ray. Why are you calling this late?” Robert asks his brother.

“I don’t know. He hasn’t been balay (home) for a while. I haven’t talked to him for a long time now. I have a lot of things to talk to him about, especially the cases that we are handling. His nanay (mother) said he might have a nobya (girlfriend). She is worried sick of him. Why?” Robert says.

“About his kasintahan (girlfriend), what do you know about her?” Ray asks.

“Actually, I don’t even know her name. He hasn’t properly introduced me. I haven’t seen them but I know he has amiga (girlfriend) that he really likes,” Robert replies.

Ray starts to sound agitated on the phone.

“You’ve got to know something about this girl. Nokarin (Where) is she from?

What is her real name? Saan (Where) are her parents? Who does she work for?” Ray keeps going.

“Whoa whoa, where is this coming from?” Robert cuts off his brother from his questions. “What’s going on? Answer me now Ray,” he demands.
“This nobya (girlfriend) of his, she was involved with a fatal death near the airport. She was spotted last scene with this man.” Ray reveals.

“Yes, my dear brother. There was a case to search for her and it had been apparently going on for a while now. Since it was a homicide, access to information is restricted. Until now. I just got promoted and the Chief gave this assignment to me. As soon as I opened it, I guessed she looked familiar but after a few minutes, I just knew it was her. I can’t be wrong because I saw her up close and who wouldn’t remember Mikey’s first kasintahan (girlfriend)?

“And then I tried to call Mikey for a while now and he is not answering his phone,” Ray continues.

“Wait, let me try and call him,” Robert tells him.

Robert starts to get mad.

Mila, Michael’s mom, is watching her favorite soap opera. Robert doesn’t see her sitting on the edge of the sofa.

“Robert, why are you still up? What’s wrong?” she asks.

He doesn’t hear her.

Robert continues to pace back and forth as he stares at his phone. “OMG, Mikey, sitaw (where) are you?”

Literally one minute elapsed since his last text message. He writes and sends another one. And clinches on the phone.

He calls again and no answer.

“Hoy, hoy, hoy …” His wife snaps her fingers trying to get his attention. “What is going on here?” she asks him with irritation.

“Oh, there you are. Do you remember the girl Michael has been seeing?” he asks his wife.

“Yes, of course. She’s so gorgeous,” she says smiling.

Mila’s eyes widen. She is shocked and speechless.

“Yes, that was Ray who called. He was calling you but you didn’t answer your phone. He said she was last seen with the cop who went missing a while back. Do you remember?

Have you experienced being in trouble and tried to hide it from your mom? Do you wait for your mom to find out about it or do you tell her before she finds out from other people? Mother has many eyes, not literally but it’s a figure of speech. Mother will find out eventually about it so you might as well tell her to lessen your punishment.

Anyways that’s all I have. Keep an eye out for my article every issue. I’m Dulce, helping you to master your Filipino Languages. Like always, let’s laugh, let’s makinig (listen), and Let’s Talk Pinoy! Hanggang sa muli! (Until next time!) Ingat! (Take care!).