In the Spanish tradition, a grand party is held when a female turns 15. It is a community and family celebration.

In six months, on January 8, 2020, Binhi at Ani will have been opened for fifteen years. From the time it opened, Binhi has served the island of Maui and its residents—local, newly arrived, young and old. It’s a gathering place that hosts the annual Barrio Fiesta, which recently was held for the 50th successive time.

After its grand opening in 2005, Binhi added several improvements: fencing, a photovoltaic system, air conditioning, a new sound system and enclosed the lanai area. But more needs to be done. The soon to be fifteen-year-old Binhi needs improvements in the areas of plumbing upgrades, termite control, new floors, bathroom repairs, general carpentry, as well as new tables—all of which are very expensive.

“With the constant use by the community, our Center has had its share of wear and tear,” said Nora Cabanilla-Takushi, president of Binhi at Ani. “Binhi’s Board of Directors agreed last December that we would embark on an annual fundraising dinner that would raise funds specifically for renovations and new equipment.”

A concept was created, Chefs were invited, a top-name entertainer agreed to perform, and yes, the initial fund-raising Gala will be held on August 3 at Binhi. Titled “Three Chefs & A Grammy,” guests will be treated to a special feast prepared by Chef Gemsley Balagso of Westin Nanea, Chef Joey Macadangdang of Joey’s Kitchen Ka‘anapali and Joey’s Kitchen Napili, and Chef Sheldon Simeon of Tin Roof and Lineage—all winners of the Master P-Noy Chef® contest held during the annual Maui Fil-Am Heritage Festival®. A special treat will be a musical performance by two-time Grammy winner Kalani Pe‘a. 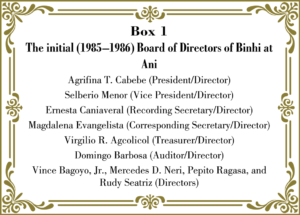 A small committee was formed to plan the Gala and undertake the difficult task of soliciting sponsors for the $5,000, $2,500, and $1,000 tables. “I wasn’t sure at first when I was asked to join the committee,” said Greg “Jay” Peros, general manager of Maui Beach Hotel. “But I thought it was time for me to contribute more to our Filipino community center here on Maui. The Center had its challenges over the years but it’s important to move forward and focus on the community purpose of the Center. I really want to see the Center do more for the youth and for the elderly. I would like to see basketball courts for our youth and programs for the elderly like gentle yoga, Zumba, etc. It doesn’t have to stop there. We can do little stuff too like a chess club. A place where the community can come together.” 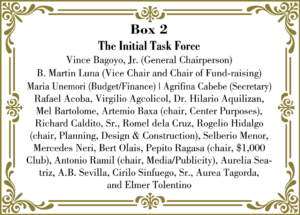 It’s taken the whole community to create the Center, beginning with the initial incorporation in 1985 (see box 1), the initial task force created in 1987 (see box 2), and the 2004–2005 Board of Directors which opened the Center (see box 3)—a time period spanning twenty years.

Recently, Binhi’s current Board of Directors has refocused its efforts on fulfilling its purpose of serving the community. The Conference Room is no longer used by a religious group on weekends and is now available for use by community groups for free, subject to availability and completing the recently approved application form. “We’ve wanted to do that for quite some time now,” says Cabanilla-Takushi, “and we’re happy to be able to offer the Conference Room to our community.” 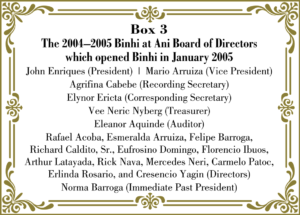 In the next few months, the Binhi Board of Directors will continue to unveil more of its ideas and plans for the Center. “We’re in the development stage of programs for youth and senior citizens,” said Cabanilla-Takushi. “For example, next summer, we plan to offer free beginning karate classes in partnership with Maui Kajukenbo. We’re also exploring how to create a basketball court on site, something Florante Garcia has been hoping for. There’s also free classes we want to start such as a citizenship class, an ACT/SAT prep course, Zumba and/or exercise classes for seniors, and maybe even art classes or Filipino cultural dances. We’ve also started a conversation with Maui Economic Opportunity to learn how we can better serve our seniors.”

“I’m very happy Binhi is refocusing on its mission to serve the community,” said Vince Bagoyo, Jr., who was the initial chairperson of the task force that created the Center. “The Board’s plan to develop a strategic plan is crucial for its future and we need to make the Center a place of learning. And we all need to support our Center—which is the legacy of the Sakadas who sacrificed so that we could have a better life here in Hawai‘i.”