A Cayetano Retrospective: The First Lady

Benjamin Cayetano: First highest-ranking elected official of Filipino ancestry in the State of Hawai‘i: 9th in a series.

Editor’s Note: 2019 marks the twenty-fifth anniversary of the election of Benjamin J. Cayetano as the Fifth Governor of the State of Hawai‘i and the first Filipino-American elected as the head of an American state. This is the ninth in a series of articles profiling Cayetano and his historic election and service. Versions of these articles appeared previously in The Filipino Summit.

Ben Cayetano, as Lt. Governor, would periodically sneak out during lunch to the Honolulu Bookstore in downtown for reading material. Tough to do with a security detail stationed outside his private office. Very few people would approach him and unless he saw someone he knew, he kept to himself. Cayetano, for those unfamiliar with him, was really a decidedly shy man. That likely surprises people who only knew of Cayetano from the public persona built over his decades in public office and as a flamboyant criminal defense and personal injury attorney. In part, Cayetano had earned a rough and tumble brawler’s image from biting, often fiery and somewhat acerbic floor and committee remarks. Over his time in the Legislature, he was also a reliable and proven media friendly quote machine.

But as he was winning election as Lt. Governor, Cayetano’s marriage to his high school sweetheart Lorraine had floundered. They drifted apart. They separated. And in 1996, they divorced after thirty-seven years of marriage.

Someone brought a karaoke machine to the Cayetano headquarters during the 1994 Campaign. One night, as supporters drifted away from a long day of phone calling and envelope stuffing, Cayetano was observed turning on the machine and singing a longing Hapa Haole song:

There’s a feeling, deep in my heart
Stabbing at me just like a dart
It’s a feeling heavenly
I see memories out of the past
Memories that always will last
Of a place beside the sea
Waikiki, at night when your shadows are falling
I hear your rolling surf calling
Calling and calling to me …

The volunteers who remained were noticeably moved. Cayetano wanted to be Governor but he was conflicted by the end of his long marriage. His voice, as he sang, seemed to reflect that conflict in his spirit.

Throughout the 1994 gubernatorial campaign, the coconut wireless quietly spread the Cayetanos’ marital troubles. Cayetano himself had been raised by a single father after his parents divorced. At least one observer wondered whether the thirty-minute campaign video titled “Reach for the Moon”—which prominently featured Lorraine—was a last ditch-attempt to salvage the marriage. But when Cayetano appeared on stage on election night and at the inauguration with only his three children, many understood Cayetano’s marriage to Lorraine effectively had ended.

Ben Cayetano became the first divorced person serving as Governor as well as the first Filipino-American.

Due to the unexpected size of the State’s budget challenges when he took office, Cayetano’s administration was dominated by various efforts to get a handle on government finances. With departments and agencies facing cuts and the State’s first reduction-in-force, Cayetano faced animosity and resentment from some of his oldest supporters and allies—public workers, educators and social service providers. It likely did not help that one of the primary faces of the Administration during this period was the dour and blunt Earl Anzai.

The Cayetano Administration did not project much hope and progress.

For whatever reason, Cayetano cast a very masculine aura to Washington Place. The image was local. Informal and rough to some degree. Somewhat clubby. Some of the younger sub-cabinet members, playing on the absence of a female partner, referred to the male political appointee overseeing events at the Governor’s Mansion as “the First Lady.” In some ways, detractors of the new Governor’s administration, given the perceived members of the Governor’s kitchen cabinet, could plausibly dismiss them as more of the same Old Boy Network—despite the number of women in key positions and the Democratic Party outsiders brought into the agencies, boards and commissions.

Cayetano’s relationship with the press had also changed. While his blunt, straightforward style had made him a good place for a quote while a legislator, as Lt. Governor and then Governor, Cayetano learned that his comments had to be more measured. But he could still offer the occasional barbed opinion when he perceived politicians—his former legislative colleagues and the younger officials who had succeeded his contemporaries in the House and State Senate—were “playing politics” instead of serving the public good. His style made the Governor—in a challenging economy—an easy target for the political pundits, the media, other elected officials, and the Kimo Publics in local Chinatown watering holes or on the Ala Wai Golf Course. Even in the Filipino community, the Filipino media outlets had no qualms expressing criticism—well-founded or not.

But all good politics is relational.

One of the first things Cayetano learned when he met the President and CEO of United Laundry Services was that Vicky Liu had not voted for him. That somehow failed to phase him. The repeated story is the couple met while working out at the Honolulu Club, a local gym. After a period of dating quietly—often meeting at out-of-the-way karaoke bars—or as privately as a sitting Governor with a security detail could do—they would marry.

On May 5, 1997, Governor Cayetano married Vicky Liu at Washington Place. That event shifted perceptions of the Cayetano Administration more than the make-up of his Cabinet or any initiatives pursued in the prior three years ever did. The new First Lady signaled a shift in style and in some ways, policy.

Also previously married, she was raising two teenagers. The Governor had three adult children. Unlike her new husband who had worked in or juggled a small law practice with the time-consuming work of an elected official, Vicky Liu operated the large United Laundry which held cleaning contracts with various hospitals and hotels. While her husband’s gruff exterior couldn’t be completely softened by a feminine presence, she brought a decidedly more formal and dignified image to the Governor’s mansion and a softer touch in hosting the many gatherings held at the Governor’s mansion. She surprised some of the Governor’s circle when she also urged that no alcohol be served at official events held at the residence—a change from the first couple of years of the Cayetano Administration. Unofficial events such as the USC-UCLA football watch party, however, would still include adult beverages.

While not Filipina, the new Mrs. Cayetano was born in Manila from overseas Chinese parents. Vicky was raised in California and started college at Stanford University. Her family would move at some point to Hawai‘i.

She also brought a subtle change to the Governor’s presence at public events, including the busy calendar of Filipino dinners. While Cayetano was usually reluctant to take a lot of photos with people at those events, Vicky was welcoming in posing with anyone who wanted a picture with the new First Couple. At one of their first public appearances at a Filipino community event—the 1997 Installation Banquet of the Filipino Chamber of Commerce of Hawai‘i—folks lined up to greet the couple and the Cayetanos gamely took photos with every person who waited. During the annual Terno Ball, Vicky modeled her white terno before other females competed in the contest.

As the 1998 re-election approached, the new Mrs. Cayetano’s presence improved and likely solidified Cayetano’s relationship with the Filipino community which already supported him overwhelmingly as its Favorite Son, even as some Filipinos were also his biggest detractors. On February 17, 1997, the United Filipino Council made an unusual year-early endorsement of Cayetano for governor in a pre-emptive move against a rumored candidacy by Honolulu Mayor Jeremy Harris. While a tight race can be decided by many things, capturing an estimated eighty percent share of the Manong and Manang vote clearly made a difference in the Cayetano-Hirono ticket winning a close election to earn a second term.

Like other First Ladies, Vicky Cayetano also had special interests and projects. A singer and musician, as a child Mrs. Cayetano and her sister appeared in an Elvis Presley movie. Not surprisingly, she took an interest in the arts.

The Governor’s residence, Washington Place, was also the historic residence of the last Hawaiian monarch Lili‘uokalani.

Sometime after his re-election, Mrs. Cayetano urged her husband to turn the house into a museum—pairing it with the restored ‘Iolani Palace as another downtown site honoring Hawai‘i’s royal heritage. Effectively, Governor Cayetano would be returning Washington Place to Hawai‘i’s people. The Governor could still reside on the property in a new residence that would foster efforts to restore the historical architecture and furnishings of the queen’s home and transform it into a place retelling Queen Lili‘uokalani’s story.

The Cayetano Administration, however, failed to convince the Legislature to fund the $1.2 million project. Undaunted, the First Lady spearheaded the formation of the Washington Place Foundation to raise private funds for the new residence. The first occupant of the new residence would be Cayetano’s successor.

Part of the legacy of Jack Burns and his successor George Ariyoshi was implementing a policy that a portion of funds authorized for most new public buildings would be dedicated to commissioning art for the new facilities and to allow the State Foundation on Culture and the Arts to purchase art for a State collection. Many pieces would be displayed in the buildings associated with the commission or at existing buildings and facilities—each legislative and state office often displayed paintings and sculptures from the collection. But many other pieces were just stored away until they could be displayed.

In dealing with the budget deficit at the onset of the Cayetano Administration, some in the Cabinet and some legislators suggested exploring selling some of the undisplayed collection. As in the case with Washington Place, the First Lady had a different vision.

The Armed Forces YMCA on Richards Street had been renovated by developer Chris Hemmeter as his corporate headquarters and re-cast as 1 Capitol District due to its location across from the State Capitol Building. It would later be used as offices for the State Department of Budget and Finance as well as the State Department of Business, Economic Development and Tourism, along with the new building connected next to it as the Capitol underwent renovations and asbestos cleaning during the Waihe‘e Administration. The Legislature, the Governor and the Lt. Governor would be housed in the new building as well while the Capitol remained under reconstruction.

At the First Lady’s urging, the Governor and the Legislature sanctioned moving the State Foundation on Culture and the Arts into the building and beginning renovations to create exhibit rooms. The Hawai‘i State Art Museum now showcases significant pieces from the SFCA’s extensive collections.

While Cayetano began his tenure as Governor as a single father, he left Washington Place in 2002 as a married man with a blended family of two sons and three daughters. 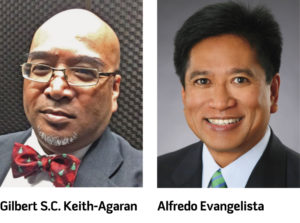 Gilbert S.C. Keith-Agaran worked in the Cayetano Administration from 1995 through 2002.
Alfredo G. Evangelista worked at Schutter Cayetano & Playdon from 1983 through 1988 and on various Cayetano political campaigns. They practice in their own law firms in Wailuku.