This month’s featured Sakada Offspring is a family man and a man with visions, hopes, and dreams: Dennis “Danny” Alfred Mateo. He was born on August 21, 1951 in Pu‘unēnē, Maui. Danny’s parents were Vicente and Nora Mateo. Vicente was from Laoag, Ilocos Norte, Philippines and was born on December 25, 1910. He arrived in Hawai‘i on board the Dollar Streamliner, USS President McKinley, on June 6, 1929 at the age of 19.

Between 1929–1975 (46 years), Vicente was contracted by the Hawaiian Sugar Planters Association and was assigned to work in the pineapple fields in Hāna as a laborer. Vicente later worked in Ha‘ikū as a laborer at Libby’s Pineapple Fields. Immediately after World War II, Vicente worked at the HC&S Pā‘ia Sugar Mill as a Truck Driver and a Tractor Operator. In those days, the employees like Vicente were given a Bango number as their identification. Showing their Bango is needed when picking up their paychecks, doctor’s visits, account at the Pā‘ia Mercantile General Store, Pā‘ia Gas Station, Post Office, etc. Vicente retired from HC&S in December 1975. He passed away on February 12, 1990 at the age of 80.

Vicente and Nora’s 6th child is Danny Mateo. As a child, he lived with his parents and 6 siblings in the Store Village Plantation Camp in Upper Pā‘ia. Their old home was located in the back of what is now the Doris Todd School. In 1959, the Mateo family moved to Makawao where Vicente and Nora purchased a home on Ai Street. Then in the early 1970s the family relocated to Makawao Ranch Acres.

As a community oriented individual, Danny was a member of the following boards and organizations: Maui County School Advisory Council, Democratic Party, Molokai Task Force, Molokai General Hospital Board, Molokai Chamber of Commerce, and the Aloha Festivals on Molokai.

Danny also received several awards and recognitions. In 2009, he was selected as one of 20 Outstanding Filipinos Abroad by Image Magazine. That same year, he was on of the recipients of the United Filipino Council of Hawai‘i (UFCH) Progress Awards. In 2010, Danny was one of the recipients of the Gintong Pamana Leadership Awards presented by the Maui Filipino Chamber of Commerce. In that same year, he was inducted into the St. Anthony High School “Hall of Honor.”

Danny’s favorite hobby is to spend quality time with his family. He actively participates in his grandchildren’s school and sports events and weekend outings.

As a man of hopes and dreams, Danny said, “As a father of three and grandfather of fifteen, I always look ahead and pray that the world finds peace and the quality of life for the generations to come be a better one. I pray for a time when war, hunger, and hate, will no longer be a part of the social fabric of mankind. I dream of the day when our children will be able to buy their own affordable homes and good paying jobs will be many, keeping our children home in Maui County, instead of leaving for the Mainland.”

Danny also hopes to hear the words “please” and “thank you” more often and that respect and common courtesy would become a part of everyday life as well as a time when government actually addresses the people’s business and common sense was the norm.

Gratefully and proudly, Danny says he was a product of the Plantation Era and the ILWU in which his father Vicente belonged to. Danny said that the plantation lifestyle taught us how to be self-sufficient. “Everyone raised their own vegetables, chickens, ducks, etc. and we shared it with one another. People made do with what they had and did their chores and responsibilities. They lived within their means. It was a time when society was kinder, when people cared about each other. People trusted each other when they could leave their house and car doors unlocked.” Danny recalls the Soup Kitchens when the workers went on strike or the summer picnics at Kalama Park, where school supplies were given to the kids.

Like all of the Sakadas, Danny’s dad came from the Philippines to an unknown place to live and work. Earning $20 a month, Vicente worked endlessly from sunrise to sunset and dealt with the language barriers. According to Danny, we, the beneficiaries of their trials and tribulations must never forget the sacrifices they made for us. Danny feels personally that the economic growth and success of Maui County in terms of being economically viable, is because of the various immigrant groups that were brought into our county to work the lands and harvests that kept the economic engines moving. Danny added that the growth and economic success of Maui County can be attributed to the contributions and hard work in the building and laying the foundation for the transition of a new Maui built on the backs of the Filipinos and other immigrant groups. “We need to remember those who gave up their dreams, in order for us to realize ours. I am proud of who I am, the son of a Sakada, and proud of my Filipino heritage,” he said. 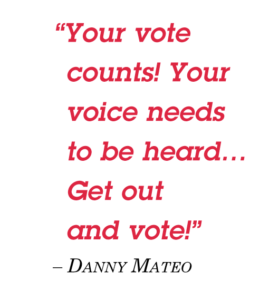 On voting, Danny gives us his opinion of the importance of going to vote. He says that people have gotten so busy with their everyday lives trying to make a living, that voting has not been of much importance. He feels that his generation looks at voting as a duty. However, the younger generation of today views voting as an inconvenience. Danny really emphasizes that all votes count and are important. He explained: “Your vote counts! Your voice needs to be heard, and the way to express yourself, support your beliefs and principles, and participate in the creation of our future, is to vote. Your quality of life should be a priority. Take responsibility. Register to vote and most important of all, on Election Day, get out and vote!”

Danny emotionally remembered his Dad becoming a naturalized citizen on July 22, 1955. He recalled this emotional event and shared proudly with everyone. “I can still remember the picture of him standing on the steps of the old Wailuku Courthouse with dozens of other newly naturalized citizens waving the American flag. Having the right to vote was such a privilege and honor for a young man from the Philippines that so loved the motherland but decided to etch out his life in Hawai‘i as a Filipino-American. He never missed an election, and made sure that everyone in the family of voting age, voted.”