On Market Street in Wailuku. At the corner of Alua and Ho‘okahi in the Wailuku industrial area. Even in a kiosk at Queen Ka‘ahumanu Center in Kahului.

These “vape shops” sell electronic smoking devices (ESDs), which include e-cigarettes and vaping devices. ESDs work by heating a liquid to produce a vapor cloud that users inhale into their lungs. The liquids used in ESDs can contain a high amount of nicotine—some brands’ liquid cartridges contain as much nicotine as 40 cigarettes. They also contain thousands of other chemicals such as propylene glycol, flavorings and volatile organic compounds.

The Hawai‘i State Legislature led by Maui’s state senators have decided to go further than the Trump administration’s announcement to ban the sale of flavored e-cigarette cartridges. The Legislature is considering the banning of menthol and tobacco flavors or flavored liquid nicotine sold in open tan systems at vape shops.

Senate Majority Leader J. Kalani English (D-Hāna, East and Upcountry Maui, Molokai, Lāna‘i and Kaho‘olawe) applauded the federal ban, saying, “I’m glad that the Federal government has moved forward on a ban, but more needs to be done. By continuing our prioritization of the 17 United Nations Sustainable Development Goals, specifically Goal #3 – Good Health and Wellbeing, the Senate is committed to ensuring that Hawai‘i remains a leader on public health issues by helping prevent the next generation from getting hooked on e-cigarettes and other vaping devices.”

English and his colleagues have introduced several bills aimed at targeting ESD use. They have also introduced legislation to prohibit the sale of flavored tobacco which has enticed so many Maui youth.

Senator Roz Baker (D-West Maui) has seen first-hand how prolific ESD use has become throughout communities in Hawai‘i, noting the middle schools and high schools which serve her district have become ground zero in the epidemic. As Chair of the influential Commerce, Consumer Protection, and Health Committee, Baker is hearing many of the bills which seek to deal with ESDs, vaping, and flavored tobacco.

Baker is a leader on tobacco use issues, having introduced a bill last session to ban flavored tobacco sales and to tax ESDs like traditional tobacco products. “Although I was disappointed we couldn’t get a flavored tobacco ban through last session, we must try again,” said Baker. “Too many kids are getting hooked because of the predatory behavior of big tobacco companies. The health of our keiki depends on us taking action.”

Along with his two Maui colleagues, Senator Gilbert Keith-Agaran (D-Central Maui) has also co-sponsored SB2227 which is one of the more comprehensive bills attempting to regulate ESDs this legislative session. In addition to bringing ESDs within the traditional definition of “tobacco products” under state law, this bill would also allocate a portion of the tobacco tax to fund health education, prevention, and nicotine cessation programs for youth.

“Regulating e-cigs is important and so is education,” said Keith-Agaran. “Young people need to know the risks and dangers of vaping and we as a state need to do more to combat the vaping crisis.”

Several 7th and 8th grade students, many from Hāna, Maui submitted testimony which included the following statements:
• Vaping or smoking in any way makes your lungs look like a raizen and it could have some bad consequences like lung cancer and when it comes to vaps and the nicatin inside is really bad for kids. Flavors attract them more.
• I know that many kids other schools smoke tabaco because of the smell or the flavor like unicorn tears, cotton cand i don’t know but i here that many kids like it to make them popular and just know that if people don’t accept you for who you are then accept your self for who you want to be in the future that means no to smoke tabaco
• I think vaping companies are targeting kids mostly
• Tabacco can cause your lungs to collapse or can cause popcorn lungs – vaping can lead to having vapor smoke in your lungs and can also cause yellow/rotten teeth along with tabacco
• Companies should not target children because its pretty much just ruing childrens lives. How dare you.
• I don’t think tobacco products should be targeted to kids because they can die. Flavors attract kids more than adults. This is not ok.
• I think the tabaco company should not target us children because if us kids start vaping or smoking cigerettes there gonna get addited to it and can’t stop doing it also they will be doing it until they die. They will be dead because they were smoking sooo much of cierettes and vapes. Also, because they would be a bad examples for other children and other fucture generation that is coming into the would.
• I think that tobacco should not be targeting kids. Flavors attract kids. Tobacco companies flavor products so they can attract more people including children.
• I think tobacco should not be targeting children. Fun flavors attract kids like me. Elementary kids really like cotton candy flavor. Adults don’t. Even menthol flavor is fun for teens. All of these flavors and advertising should not be available to kids, but they are. Please help us stop this problem.
• I think that its bad that the tobacco companys are targeting little kids by selling products that are pleasing to their liking. This is causing problems for these young kids like having health issue due to vaping. Several cases has shown us that it is taking their lives because of them using it. We need to take a stand and get it off the shelves for good. These products are dangerous for us students, so if it is banned for good, we will not have to worry about it any more. It will also not be so tempting when it is easily accessed to young kinds. Help save us from dying.

This sample of testimony from seventh and eighth graders is a cry for help.

Maui’s health professionals are also raising the alarm about ESD use in the community.

Dr. Jeffrey Chester, an addiction specialist with Akamai Recovery Maui who cares for many local Filipino clients and families, warned of long-term dangers for adolescents saying “Priming an adolescent’s brain with large doses of nicotine, I predict, will lead to other chemical dependencies, which likely will include alcohol, opioids, amphetamines/methamphetamines, cannabis, and cocaine.” Chester also warned “It’s not just water vapor. People aren’t always aware of exactly what they are inhaling,” noting other substances may be added without users’ knowledge, including marijuana, methamphetamine, cocaine or Fentanyl.

Carmen Cook, Program and Clinical Director with Akamai Recovery Maui, expressed concerns about the effects of ESDs on family cohesion. “On one hand, adolescents will explore substances and rebel as they mature into adults. Trying to set appropriate limits will often backfire as adolescents resist their parents’ limits or become more secretive of their use—so I think a lot of parents feel at a loss of what to do. It’s causing a lot of conflict and pain for many families I treat,” said Cook. That’s why Cook believes so strongly legislative action is needed, describing the proposed prohibition on flavored tobacco sales as “a very important message to send, and we should not back down.”

Dr. Colleen Inouye, who practices in Kahului, agrees. “Hopefully, after the legislators saw what happened nationwide last year to many young vaping patients, they now realize the importance of legislation to prohibit the sale of flavored ESD products/tobacco statewide.” Dr. Inouye encouraged community members to continue talking about the dangers of ESDs, saying “As a physician, I am only one person to tell my patient to stop using ESDs. The rest of my patient’s community, like family and friends, need to do their part in helping my patients live to their fullest health potential.”

The Filipino Community Steps Up

To that end, members of Maui’s Filipino community are encouraging all kababayans who are concerned about vaping and ESD use to continue to speak up, particularly the youth who are most affected.

Jeny Ramos Bissell, the Family Health Services Division Administrator for the State Department of Health in Maui, said “Successful legislation and enforcement of such laws have to start from grassroots and the community. Stories about children and youth hit the heart and soul of policymakers, providers and caregivers.” Bissell adds others in the community should learn more, to arm themselves with accurate information about the vaping epidemic. “Education about environmental risks and protective factors is key to health, wellness, and behavioral change. Education through the children and youth is a gateway and a powerful path to their parents and caregivers.”

It appears the message is working. A recent statewide survey by Ward Research, including respondents from Maui, found Filipinos in Hawai‘i had stronger anti-tobacco attitudes than the general public. 93% of Hawai‘i Filipinos surveyed thought vaping or ESD use was a major problem among school aged youth—6% higher than the statewide average—and 81% of Hawai‘i Filipinos surveyed support the Legislature banning flavored tobacco, including menthol.

A Cry for Help

Will 2020 be the year the Legislature and the Governor listen to the words of the students? “Please help us stop this problem” and “Help save us from dying.” 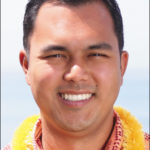 Tyler Dos Santos-Tam is a Honolulu-based business consultant and the descendant of Sakadas from Badoc, Ilocos Norte and Cebu. Dos Santos-Tam serves as the Honorary Consul of Portugal in Hawai‘i, Chair of the Honolulu Neighborhood Commission, and President of the Young Democrats of Hawai‘i.
Assistant Editor Alfredo G. Evangelista contributed to this story.