Pssst….Can You Keep a Secret?

It was 2 a.m. and Maria was wide awake, lying next to Junior. Friday night and it was their regular date night, making passionate love through well past midnight. Maria was twenty years old, single, and a nursing student at the De La Salle Health Sciences Institute. Junior was fifty years old, married, and the Mayor of Diliman City. 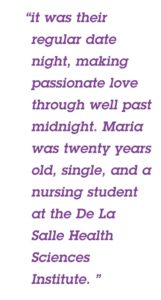 Maria met Junior four years ago at a party hosted by De La Salle, where Junior was the Chairman of the Board of Trustees. Maria, who was fair and stood at 5’ 8″, immediately caught the eye of Junior. She came from a poor family in Davao and was working as a hostess for the San Miguel Company. San Miguel’s Chairperson, Monsignor Jose Cadabana, a retired priest from a wealthy family, was also a member of De La Salle’s Board of Trustees, and he brought San Miguel’s hostess crew to all the major events that he attended.

Junior loved to boast that he was Manila’s Arnold Schwarzenneger, having won a few weight lifting championships himself. But the similarity would not end there. Junior was known to be a ladies’ man and his wife of thirty years, Ofelia, begrudgingly tolerated it. Ofelia and Junior had five children, all in government and in the family businesses of real estate and trade. Samson, the eldest at 28, was a member of the Provincial Board; Francisco, the second eldest at 26, was his Dad’s Chief Aide; Elena, the middle child at 24, was the chairperson of the quasi-legislative body called Fairness in Politics (established after the long-drawn out battle between Ferdinand Marcos, Jr. and Leni Robredo for the presidency); Sarah, at 22, was her Dad’s Chief Spokesperson; while the youngest child, Jose, 21 years old, was already a City Councilmember.

Although Maria enjoyed her job as a San Miguel hostess, deep inside, she always wanted to be a nurse. She knew Monsignor Cadabana could help open doors for her. That night at the Grand Manila Hotel, Monsignor Cadabana introduced Maria to Junior. Junior was playing solo that night and slowly began his pursuit.

Over the next few months, Junior would innocently make contact with Maria, on the premise of helping her to develop her resume to get into De La Salle. Junior hired her on a short-term contract to be his Special Assistant for Special Activities. Together, they would travel throughout the country to attend conventions, business meetings, government meetings. On one occasion, Junior brought her to an investment meeting in Hong Kong.

It was there that Maria finally succumbed to Junior’s sexual advances. Maria, raised as a Catholic, had resisted so long but dreamed she could be Junior’s companion and accompany him worldwide on all his trips, where Junior would buy real estate in Canada, Australia, London, and the United States. That first night of lovemaking was not really what Maria had fantasized about; Junior had immediately fallen asleep after a brief session; and Junior’s snoring kept Maria awake. Maria cried herself to sleep, wondering what she had done.

But the next day, Junior surprised her with a diamond bracelet and matching necklace, and Maria’s fears were immediately erased. Their meetings were more frequent, in Junior’s business office, his condo in Mandaluyong, his private government office, and once at his home while Ofelia was visiting relatives in Los Angeles.

And Maria got her wish. She was accepted at De La Salle’s nursing program, with a tuition waiver, provided she volunteered ten hours a week at De La Salle’s spiffy new training hospital in Mandaluyong. The work schedule allowed Maria to meet with Junior regularly and sometimes at a moment’s notice.

But tonight, Maria was thinking of her Mom who recently passed away in Davao. Maria could not go to her Mom’s funeral because Junior had insisted she accompany him to Laoag for a conference. Maria had begged and begged Junior and promised to take even more breaks from school and work so she could be with him more often but Junior reminded Maria that she wouldn’t be where she was, if it was not for him. Maria missed her Mom’s funeral and had to make up an excuse of working so her father and three brothers would somehow understand.

The sadness Maria felt was tearing her apart. She appreciated everything Junior was doing for her and understood her obligations to him. But she missed her Mom, who died of breast cancer at only 42. Maria last saw her Mom six months ago when Junior and she traveled to Davao to attend the opening of the Rod Duterte Foundation Museum. Maria was able to sneak away for a couple of hours and learned her Mom was dying. Maria told her Mom she was in school and working as a Special Assistant to the Chairman of the Board of Trustees of De La Salle. Maria gave her Mom some money that Maria had saved from her monthly allowance that Junior gave her.

Maria kept sobbing and sobbing while Junior kept snoring and snoring. Maria knew Junior would soon awaken at 5 a.m. and want to make love but Maria knew she wouldn’t be in the mood and she was afraid of what the consequences would be.