Second in a series

While Junior continued to snore, Maria began praying to the Blessed Virgin Mary. Even though Maria was violating the Ten Commandments, she still believed that God was merciful and full of grace. “Blessed Mary, mother of God, please forgive me for my sins. Guide me in all I do and help me to find my way back to you. Help me to find the strength to deal with my problems. In Jesus’ name, I pray.”

Maria’s life, which was so much simpler a few years ago, was about to get even more complicated. She knew something was wrong. Maria was feeling light headed, sick and dizzy. She had never felt like this before.

Maria decided to slip away from Junior and walked to the nearby St. Mary’s Cathedral. Maria felt her prayers in her lover’s bedroom did not give her the peace she sought. So she had to get away and she would deal with Junior later.

“Forgive me Father, for I have sinned. It’s been over two years since my last confession.” Already, Maria knew her statement was not completely accurate as the last time she had been to confession was when she had returned from her Hong Kong trip with Junior when they had finally made love–some four years ago.

Nevertheless, Maria felt better at confessing her “minor” sins. She just couldn’t confess everything at the moment. “Father, forgive me, for I have neglected my family, and I miss my Mom so much. I was not truthful to her before she died.” The padre gave Maria a penance to perform and absolved Maria of her sins.

After the confession, Maria knelt quietly in the pews, praying fervently for guidance. “O Lord, what shall I do. Please give me a sign. I know that I have not been faithful to your Word but please understand my situation.”

As Maria was about to depart St. Mary’s Cathedral, she saw her best friend Elena leave one of the confession booths. Elena was her bestie since they were ten years old and they were classmates at the old St. Mary’s School, before they tore it down to make room for the Cathedral. Elena was also a former member of the San Miguel’s hostess crew but unlike Maria, Elena did not come from a poor family as she always had the best clothes and even a driver.

Maria never met Elena’s father; Elena claimed her Dad had died a long time ago. Elena’s mother, Rosa, was beautiful and a former international stewardess for Philippine Airlines. Rosa was still flying for PAL but only on the domestic routes. When Elena was younger, Rosa left Elena under the care of the nuns at St. Mary’s. The nuns were happy to babysit Elena, who could be a handful at times but yet deeply religious. 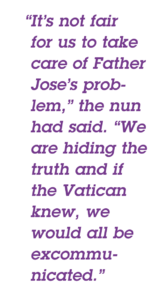 Maria had heard the rumors but she never asked Elena who her real father was. One night, when Maria had stayed overnight with Elena at St. Mary’s, she heard one of the nuns complain how Elena’s dad was reducing his monthly allowance for Maria. “It’s not fair for us to take care of Father Jose’s problem,” the nun had said. “We are hiding the truth and if the Vatican knew, we would all be excommunicated.”

Elena was always generous with Maria and they would always go to movies together, with Elena footing the bill. Elena easily was accepted at De La Salle and was on her way to becoming a medical doctor while Maria was still a struggling nursing student. Elena dreamed of moving to the United States to practice in New York. Maria dreamed of moving to anywhere to lead a new life.
“Maria! I haven’t seen you in over a month? What have you been up to?” exclaimed Elena. “I’m so sorry Elena, I’ve been so busy with school and work,” answered Maria. “We really need to get together very soon,” said Elena, “I want to share some good news with you. Can we meet up tonight at Joe’s?” Joe’s was their favorite hangout, featuring the hottest bbq bar, where the chefs would grill chicken, fish, beef, vegetables, and pork. And yes, Joe’s was owned by Monsignor Jose Cadabana.

Maria agreed to meet Elena that evening. Elena didn’t know anything about Maria and Junior and Maria never told Elena what she had heard about now Monsignor Jose Cadabana being her real Dad. Maria had made a promise never to tell Elena what she heard that night. Many times, when Elena had been sad not knowing her Dad, Maria was tempted to tell her what she knew but Maria wasn’t so sure how Elena would react. Elena, on the other hand, told Maria everything—even when Elena had snuck away with her then boyfriend Juan–and had become a woman at the age of fifteen.
Maria pondered whether she would tell Elena about her complicated situation. Her phone beeped with a text from Junior wondering where she was. Maria texted she couldn’t sleep so she went to church and would soon be there. Junior texted to hurry back as he missed his morning love making with Maria. Maria texted she was with Elena and would be there in half an hour and texted to Junior to be ready for her.

But first, Maria had to make another stop. She had to see Francisco, Junior’s second eldest son.