Happy New Year everyone! We pray 2021 will be a better year!

Keola died at a young age of 31 on January 20, 2020, Martin Luther King Jr. Day. He had complications with his heart at birth and required three heart surgeries at UCLA Medical Center. It was hard for the family but he was a fighter during his illness. He graduated from King Kekaulike High School and attended Maui Community College, majoring in Computer Science. He worked part-time at the College and did light work where he could but he was always tired. He was handicapped and disabled. 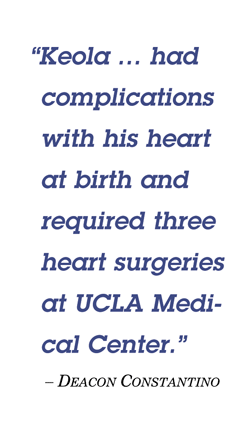 We took him on vacations to Disneyland, San Diego Zoo, Sea World, Disney World, Lego Land and Las Vegas. He always traveled with his oxygen tank and he enjoyed himself going on rides, shows, scenic places etc. It was good for us when he came because he had the handicap card and he was always allowed to go first in spite of all the long lines. The whole family was included with him.

I remember one night in San Diego at the Wyndham Time Share. His uncle Jerry thought something happened to him because he didn’t hear Keola’s oxygen tank. Jerry woke up and said, “What happened to Keola?” and Keola said “Uncle, I’m in the bathroom and I turned the oxygen off.” We were all worried.

Another time at the Fremont Hotel and Casino in Las Vegas, the security guard came to check on Keola and asked for his ID because Keola looked so young. They asked him for his ID every time he came to play on the machines. So finally they gave him a wrist band so they didn’t have to ask for his ID again but they continued, every time he was playing.

My grandson Keola was a smart man. He knew all about computers, cell phones, programming, etc. He liked sports; his favorite football team was the Carolina Panthers with Cam Newton at the time. He also liked the Phoenix Suns and the Boston Red Sox. We went with him to watch the Los Angeles Dodgers play at Dodgers Stadium. Keola’s wish was to see a professional football game. We had plans to attend the Los Angeles Rams vs. Dallas Cowboys in August 2019; we had our tickets and air fare ready.

But on July 28, 2019, Keola took ill and had an infection. Our granddaughter Ashley called an ambulance to pick him up at our home and brought him to the ICU at Maui Memorial Medical Center. Keola was critically ill; they could not treat him further so they flew him by Medivac to Queen’s Medical Center in Honolulu. Fr. Jaime Jose anointed him before Keola left.

While at Queen’s Medical Center, we met with the doctors who said Keola was very ill and they would try their best to make him well. They also cautioned to be prepared because he could go anytime. Keola’s first two weeks were very critical and we asked everyone to pray for him. Fr. Jaime and Fr. Michael led prayers and masses at St. Joseph Church, Maui Council of Filipino Catholic Clubs, United Congress of Filipino Catholic Clubs, Divine Mercy Family and friends and relatives.

It was a miracle Keola got better and stronger.

But one of the things we struggled with during Keola’s critical time with his illness was to tell him about going home! We asked him if he was ready to go home to God. He got angry at us! He said “NO! I want to go home to Maui!” After our constant talking and praying and advising, Keola said “Okay, let’s go home.”

He got stronger and he was discharged from Queen’s Medical Center on October 8, 2019 to come home to Maui. He had a great homecoming with family and friends. We celebrated his 31st birthday on November 16, 2019.

Keola was doing well—until January 2020. Fr. Michael came to anoint Keola but Keola got ill again and was going in and out of the hospital. Keola was moved to Hospice Maui where he passed away on January 20, 2020. Family and friends prayed and gathered to say our last farewell–until we meet again.

On the night of Keola’s death, something happened in a dream of my seven year old great grandson Iziah who was preparing to attend Religious Education classes at St. Joseph Church. Iziah was excited to tell us—before our first Rosary prayer for Keola—“I saw Keola! In my dreams last night, Grandpa. And he was with that man!” Iziah pointed at the statue of Jesus! saying “That’s the man! And Keola said ‘I’m okay. Look no oxygen.’” Iziah described how Keola was walking well with Jesus standing by him. We all cried and hugged one another in tears, praising God!

Keola visited Iziah again on the night of his funeral and said to him “I’m okay, smiling and walking with Jesus!”

I also saw Keola in a dream and he was smiling and having fun with the Matsui family. I went up to Keola and hugged him, touched his face and said “Are you real?” Keola smiled and went away!

For all of us, our lives now will not be the same. We need to make changes in our life! Let us remember the life we had as an experience, to help us change in this lifetime now!

Please be open to these changes as we pray the Serenity Prayer:

God, grant me the Serenity to accept the things I cannot change, Courage to change the things I can, and Wisdom to know the difference. Help me to accept hardships as the pathway to peace, taking as Your Son did this world as it is, not as I would have it. Let me trust that You will make all things right if I surrender to Your Will. May I be reasonably happy in this life and supremely happy with You forever in the next. Jesus, I Trust In You. Amen! 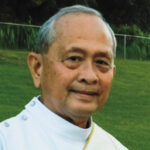 Constantino has served as a Deacon for thirty-three years and married to his lovely wife Corazon for fifty-nine years.