During the Yale of Ramirez and Kavanaugh…

I went to Yale.

At my age, I don’t really talk about it much.

Admittedly, I only applied to some colleges outside of the NCAA Top 20 in football due to the pushing of my Maui High School counselor George Yoshimura. I worked my butt off in high school but I still felt very fortunate to get into some good schools.

I attended Yale just over a decade after Old Eli first admitted women as undergraduates. Teenagers rarely consider twelve years ago as fairly recent history. There were old Blues and probably some younger ones who still suggested “Yale was Yale when Yale was male.” But I never knew a Yale that wasn’t co-ed but New Haven still remained tradition-laden when I stepped on campus in the Fall of 1980.

Four of us came from Hawai‘i. One person from Punahou was a swimmer and I probably met him once or twice in four years. Ken Goldstein came from ‘Iolani and I spoke to him occasionally when we ran into each other over the years. The third—Sharon Nicholson—was a military dependent from Radford who occasionally worshipped at the same Baptist Church I attended during college. The class ahead of mine included another Maui High grad Michael Murata, Waipahu High’s Brian Kanno, ‘Iolani’s Ernest Nomura and Moanalua High’s Dayle Murakami. Yale didn’t draw many students from Hawai‘i during my years on campus.

In retrospect, I developed some insecurity at Yale. I felt to a certain degree underprepared (all on me and not on my high school teachers). When I took Shakespeare survey courses, I was reading most plays for the first time; we read excerpts from Romeo and Juliet and Merchant of Venice at Maui High. I found Yale classmates had gone through all the Bard’s comedies and all the tragedies and some of the histories. While I struggled through the “Great Books” of the Western Canon, likewise there were many classmates who had evaluated them during Prep School.

And anecdotally, pre-Meds intentionally enrolled in the introductory science courses—subjects they’d taken in high school—to build up their GPAs.

But I loved the coursework even as I discovered that I wasn’t as respectable a writer as I had assumed starting out. Nevertheless, after freshman year, I purposely loaded up on writing intensive courses. Over time I also picked up on the tricks that the Preppies brought with them to New Haven. Who knew you could ask for extensions on deadlines? Apparently the New York Times and literary magazines often published reviews of the books assigned in our classes. Used properly, those articles provided some insights and criticisms you could bring up in small group discussions (you just had to make sure the professor teaching the course hadn’t written the review).

As a public school kid from Hawai‘i who frankly was just glad to be there, I was more an observer than a person deliberately striving to move up in the American social ladder through the connections I made at Yale. I watched some good friends who deliberately wanted to hang with certain classmates because of where they came from and who their people were—it kinda busted the American myth that we didn’t have a persistent and hereditary native aristocracy. I also felt some envy the ease that some classmates moved in social settings—they wielded a casual charm while I’d always been somewhat shy and reserved.

Asians in my time were nonchalantly called “model minorities”—that somehow we were different from other applicants from ethnic minorities. Don’t get me wrong, we were still viewed as poles apart from normal Yalies. Nevertheless, quite a number came from the familiar Prep Schools (Andover, Exeter, St. Alban’s and Hotchkiss and the like) and fabled Public Schools (Stuyvesant, Boston Latin). A surprising number were also Legacies.

Over four years, I Forest Gumped my way in the background of various social clumps.

I had friends who were athletes (or semis like my crewjock roommate) or hung out with them, and I covered some sports for the Yale Daily News and played intramurals. I also had friends who pledged the only fraternity DKE and who organized and ran the various residential college keg parties.

I knew people tapped purportedly in Truth & Courage (a secret society so you could only guess). I certainly recall some of the strange things certain of my friends did during Tap Nights, including an avid golfer putting with his nose in Cross Campus Library and occasionally confirming loudly with a jig, “It’s in the hole.”

Looking back, Yale had our share of misogyny, casual racism, arrogance and snobbishness. Many times, we probably tolerated offensive statements and behavior more than we should have.

I don’t think I ever ran into the young Brett Kavanaugh during my time at Yale—he was a freshman when I was a senior. But some of the names mentioned in various news stories about Deborah Ramirez’ charges sound familiar. Much of what Kavanaugh and his critics have brought up ring true in my experience. People worked hard. But people often also partied hard, sometimes too hard. And students at Yale were generally very smart or gifted in some way, and quite a number of the biggest partiers finished in the top quarter of the class.

I admit that I did drink beer and I still enjoy an occasional cold one. I have, on occasion, had too many and had to sleep it off. I don’t doubt that I did some embarrassing things in college that my older self, in retrospect, would never condone. I probably still owe a lot of people apologies. I don’t think I ever started a bar fight but I vividly recall how some people were worse drunks than others.

Many of us arrived on campus and departed with some expectation of healthy respect from simply earning a Yale degree. And yes, we sometimes convinced ourselves that as Yalies, we deserved status and privilege because we had worked hard to earn our place at Yale and in our country. You could buy a banner or t-shirts that declared the closing lines of the Alma Mater, “Bright College Years”; “For God. For Country. And for Yale.” 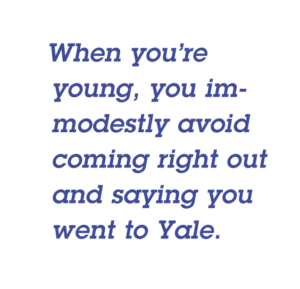 I still feel some pride when another Yalie is recognized for something. But I also realize we live in a world where our resumes sometimes cover up our essential character and abilities. As a classmate sagely describes (she’s a professional writer), Yale “helped launch us into the world with credentials that may have made us seem more impressive than we were.” I have no doubt that a Yale degree didn’t hurt my chances in getting into a good law school, and perhaps my first legal job.

But with all the focus in the last month about the Yale of my era, I kinda think the degree has been somewhat tarnished. When you’re young, you immodestly avoid coming right out and saying you went to Yale. Instead, you note you went to school in Connecticut or some other oblique reference to the Ivy League school in New Haven. In my dotage, I don’t wield my Yale degree as often anymore as a buffer. I try not to mention it generally since I attended in the previous century. But I don’t deny the Yale described by both Deborah Ramirez and Brett Kavanaugh is the Yale I experienced.