I’ve heard great speakers—the semi-professional toastmaster-trained ones who seem to enjoy being up at the podium and move seamlessly from one thought to another. I have to work at it and I usually prefer speaking from a script rather than notes.

I actually look at people’s faces while I’m talking and I note their reactions as I’m speaking.

This is a special year after two years in this pandemic world—graduations will include large gatherings, and, after further review, lei can be given by family and friends to the Class of 2022.

Commencement speakers are expected to provide parting words of wisdom and encouragement. I previously provided some remarks to University of Hawai‘i Maui College graduates and some of it remains applicable to this year’s high school graduates.

You, and your friends and loved ones, have good reason to be proud today. When you come up and receive a token of the degree you’ve earned, you are marking both an end and a beginning.

And tonight you can start a new tradition as you come up to collect your diploma—give your principal or Board of Education member Kili Namau‘u a tip. One or two bucks to show your appreciation for a job well done, and at a reasonable price.

Some of your parents or grandparents may remember when the little towns of Kahului, Waihe‘e, and Waikapū straddled the biggest towns on Maui—Pā‘ia and Pu‘unēnē and Wailuku, and the sugar mills anchoring the large sugar plantations ringed and filled our central valley.

Sugar operations have now ended so we’re in a time of change. In the six years since HC&S’s final cane harvest, Maui’s landscape has changed noticeably—Pu‘unēnē Mill’s stacks no longer billow smoke into the air and Mahi Pono’s citrus orchards are well on their way along Kuihelani Highway and you can see rows of vegetables planted on their inner fields and livestock on now rolling pastures on its eastern holdings. Here and there, ratoon sugar stalks go untended.

What you know is only what you’ve experienced growing up over the last two decades and especially during the age of COVID.

If you grew up on Maui over the last twenty years, your cultural touchstones—the common experiences that show you live here—are different from those of my parents and probably myself and my high school classmates. Here’s a somewhat updated cultural list from what I provided four years ago for you to consider—you can ask your parents or your older friends about them later if you don’t get them:

1. You have never been asked if you wanted beans with your guri guri (and the shop has always been at Maui Mall).
2. When held, your Maui Fairs (not Maui County Fairs) have always been at the War Memorial sports complex while your Barrio Fiestas have been at Binhi at Ani Filipino Community Center.
3. NASKA has always been called Kanahā.
4. Your UH football team has always been known as Warriors rather than Rainbows.
5. The Maui News has always been mail delivered rather than dropped off by the paper boy or girl.
6. If you live in Central Maui, shopping for groceries means Safeway, Foodland, Tamura’s or Costco rather than Noda’s, Ah Fook’s or Ooka’s.
7. The upcountry high schools have always been King Kekaulike, Seabury Hall or Kamehameha Schools Maui rather than Maui High.
8. Seabury Hall has always had male as well as female students.
9. You have always had the choice of flying directly to the west coast from Kahului Airport without a Honolulu connection.
10. Our largest concert venue has always been the Maui Arts & Cultural Center rather than the Lahaina Tennis Stadium.
11. Krispy Kreme or Maui Specialty Chocolates are what you take as omiyage rather than Shishido manju or Komoda pastries.
12. Kaho‘olawe or Kanaloa has been a cultural reserve and not a bombing range.
13. Hawaiian immersion education has always been a choice for you.

What this means is what you take for granted today as normal is subject to change.

The real world is life as you live it. And tonight marks a turning point for you.

So here are a few simple suggestions.

Live in the now.

One of the biggest difference in expectations between my parents’ generation and mine is that they hoped, and planned, and even expected to find work in one company and spend most of their careers in that same company or field. My dad, for example, worked for over forty years for HC&S as a sugar irrigator. He tended fields outside Pā‘ia that spread towards Baldwin Park for many years.

You’re entering an even more challenging and connected world that’s dynamic and quickly shifting. So be flexible.

You should be open to opportunities and challenges because change will come even if you’re not ready. Life happens.

Nothing ventured, nothing gained.

Use what you’ve learned.

But keep in mind that you’re not and never should be defined by your level of education, or your credentials, or a title, or how much or how little money you’re paid. Your education doesn’t stop after high school. Your true education starts today.

You’ll find you can pick up something new every day and none of your education will help you if you don’t chance ‘em when you have a learning opportunity.

But if you need directions, ask someone. We don’t get where we are without the support and guidance of other people.

Let me leave you with some notes of caution.

Another cultural touchstone is that Magnum P.I. is the longest running television show filmed locally, and it’s not about Filipino guns.

Some of you older students and perhaps people on this stage may know that in my small kid time there was another Magnum P.I. that ran even longer than the current show. Different actors but the same setting—sun, surf, beautiful landscapes, some humor and a lot of crime.

While the world has become closer in many ways through globalization, much of the country and the world still views Hawai‘i as an exotic place, a paradise. And people come to Hawai‘i with romanticized notions about our lifestyle and our people.

It will be a challenge for you who stay here to reconcile our American-style economy with real respect for the authentic host culture.
You will also be operating in a world where your certainty and your sense of injustice can prevent meaningful dialog on many issues. Don’t get me wrong, anger arising from conviction and indignation from principle have their time and place. 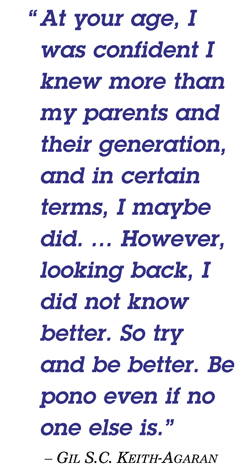 At your age, I was confident I knew more than my parents and their generation, and in certain terms, I maybe did. It’s much the same way that my nephews and nieces intuitively know how to use my iPhone better than me.

However, looking back, I did not know better. So try and be better. Be pono even if no one else is.

And whenever you can, put your phone down, and have real conversations with real people. New York Times columnist David Brooks wrote a book around the distinction between the resume virtues and the eulogy virtues. As he describes them, “the resume virtues are the ones you bring to the marketplace that make you good at your job. The eulogy virtues are the moral virtues. They are the things they say about you after you are dead—whether you are honest or brave or caring or capable of great love.” Brooks argues that “we all know that the eulogy virtues are more important than the resume virtues, but we live in a society that puts a lot more emphasis on how to build skills than how to build character.” In short, he observed, “a lot of us are clearer on how to be successful than on how to be virtuous.”

Your sense of self is based on your character. In my own religious tradition, we refer to this notion as the golden rule: do unto others as you would have them do unto you. When I was growing up, Maui was a great place to live, work, play and raise a family. I came home after college because I believed that. I still do.

So I hope you know that whether you intend to or not, you can play a role in determing whether Maui Nui remains Nō Ka ‘Oi.
But try doing it with some humility and compassion.

Celebrate and share your humanity and your distinctiveness. You’re Americans. Or not. Native Hawaiian. Perhaps Hawai‘i-born Filipino, or immigrant. Japanese. Chinese. Korean. Some other Asian. Haole. Or hapa.

You are sons and daughters. Brothers and sisters. Mothers and fathers. Friends and lovers. Never forget those blessings.

As you collect your degrees tonight, think about living in community. We live on an island. We are island people. And we are counting on you to keep Maui nō ka ‘oi.

Mahalo and best wishes for all your challenging tomorrows. 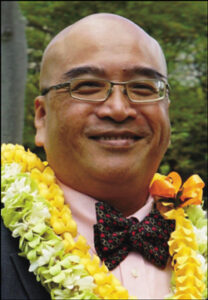 Gilbert S.C. Keith-Agaran provided the Commencement Address at the University of Hawai‘i Maui College graduation ceremonies in 2013 and 2017.