Reading Books: Key to Opening Your Mind to Any and All Sorts of Imaginable Possibilities

“It was a dark and stormy night.”

A Facebook friend posted that opening line is a familiar punchline for Snoopy’s novelist persona in Charles Schulz’ Peanuts comic strip. But it’s also the first sentence in one of my favorite childhood books, A Wrinkle In Time by Madeleine L’Engle.

That book, small kid time, helped open my mind to all sorts of possibilities.

It was one of the first “novels” I read, graduating from the short chapter books we got in the early grades of elementary school. The melding of fantasy and religion and science surprised me. The interaction of the adolescent characters—mousy 13 year old Meg Murry, her quiet little brother Charles Wallace and Meg’s friend Calvin—captured the truth of my own experience. I probably saw a little of myself in each of those three—unsure, immature, alienated, stubborn and perhaps taking action with the wrong motivations.

Published the year I was born, I read it while attending Doris Todd Memorial Christian Day School in Pā‘ia. I can’t remember if I borrowed it from the Book Mobile or ordered a copy through Scholastic Books. I just remember devouring it.
The trio, spurred by a strange extraterrestrial character, travel across time and space and perhaps universes, to find and rescue Meg’s missing scientist father.

On one level, it’s a straightforward quest across strange fantastic landscapes. But like some of the best young adult literature, the story raises serious questions and provides lessons on many levels about friendship, love, loyalty, faith, truth, good and evil.

I know the book won the 1963 Newberry Medal and other awards. I only learned later that it also became one of most banned books in our country. Among objections was A Wrinkle in Time raised questions about orthodox religion and some say because the main character was a girl.

A Wrinkle In Time has been adapted into films twice—a television movie and a big screen version. Trust me. The book is better.

When you read a novel, you create images of the people and picture the action vividly in your mind. For a book like A Wrinkle In Time, with characters that might be the seraphim and cherubim described in the Old Testament, and travel through out worldly settings, your imagination is unlimited. Film, even with modern special effects, can’t match that.

I later also took in L’Engle’s sequels and related books, A Wind in the Door, A Swiftly Tilting Planet, and the two published while I was in college and graduate school, Many Waters and An Acceptable Time.

I still enjoy them all, and I still give them to children as gifts, knowing they will open up their imaginations as much as mine. 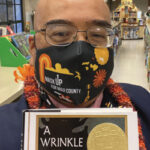 Gilbert S.C. Keith-Agaran represents Central Maui in the Hawai‘i State Legislature. When he was presented a Mahalo Award by the Hawai‘i Friends of the Library, he picked A Wrinkle in Time for donation to the Kahului Public Library and the Hawai‘i State Library in downtown Honolulu.