At the year-end Rizal Day commemoration, my mother Lydia Coloma accepted a Maui Filipino Community Council citizenship award on my behalf. By all accounts, she delivered a good speech (check the video on my sister Velma’s Facebook feed). Someone on a table near where my sister sat expressed appreciation for our mother presenting the remarks without reading glasses. At 94, my mother is in pretty good shape. No doubt her daily walks and physical activity help, as well as a diet more common for the provinces than island plantations.

My mother reported if I were able to attend, I would have expressed puzzlement on why I would be receiving a citizenship award. After all, being a good citizen is such a minimal requirement for living in our community. As she recounted for me, I only deserve the award because the residents of this island impacted my life. I was born and raised on Maui, growing up mainly in Pā‘ia (before that Mill closed) in a neighborhood where family and community had meaning and value—you watched out and cared for your neighbors and their families because they looked out for yours. As she observed, the reciprocity of caring is the best aspect of the Filipino cultural trait of utang na loob—innate gratitude arising from our inner self and character.

I came back after going to school on the mainland and seeing America. I basically wanted to live, work, play and raise my family on Maui. It’s where I considered home.

In doing so, I had the opportunity to work in the cabinets of Hawai‘i Governor Ben Cayetano and Maui Mayor Alan Arakawa. Finally, I have been honored serving the residents of Kahului, Wailuku, Waihe‘e, Waiehu and Waikapū in the State legislature.

But I’m old enough to recognize Filipinos and the Filipino community throughout my life sometimes seem outside the mainstream. Our role seems reduced to cheap labor for the Visitor Industry’s back of the house just as the Sakada generation provided the field workforce for the plantations or filling food and other service jobs not viewed as living wage careers.

At what point are Filipinos not just derisively described as settlors but recognized as equal and permanent residents of this community? Is hula a talent in a scholarship pageant but perhaps a Visayan folk dance is not as valued? And does that unspoken question about the alien-ness underlie an uncomfortable suspicion that some will view Filipinos as akin to tourists here no matter how many generations have been born and died here—like the suggestion on social media during the pandemic that if the hotels, like the plantations, fade away, so will the Filipinos, who can just go back to the Philippines.

Filipinos, especially immigrants, are not easily integrated into the local community completely. Newcomer children may not be on youth soccer or baseball teams with parents too busy in their jobs to attend games anyway. They may not participate in extracurriculars unless recruited by friends or a teacher. Even as Filipino children make up growing numbers in our public-school student bodies, Filipino teachers have not kept up.

A paucity of role models remains true in most workplaces. Tons of Filipino workers but few managers or executives. You see more Pinoy nurses than doctors. There remain few kababayan examples in established businesses, financial institutions, law firms or academia. Admittedly, quite a number of local leaders might be part-Filipino but have an outlook reflecting their mixed-heritage in relating to the diaspora community. As a local-born Filipino, I plead guilty I lean decidedly American even though I’m a Full-Blooded Ilocano (FBI).

During the pandemic, I was struck by the folks who came to help with food distributions at Binhi at Ani. As a Filipino organization, I expected countrymen but volunteers included those with little obvious connection to the local Filipino community except perhaps some common association—a church, working place or perhaps friendship. The young people deployed to the project from the local National Guard units included quite a number of Filipinos—some born here and some immigrants—including the officer corps. The people who drove through to accept food boxes reflected the broader Maui population.

Throughout my life, I have volunteered for various Maui non-profits and Filipino community groups and worked on projects with people from a variety of backgrounds. I never really gave much regard to the kinds of people in the clubs, or who showed up to volunteer, or the type of people we were helping. We participated as residents of this island to help those who needed it.

But I can understand the head counting impulse often occurring after an election. How many Filipinos are working for the Governor or Mayor, and in what kind of positions? Governor Cayetano got a bit of a pass since he was a member of the tribe but even he didn’t satisfy some Pinoy leaders. But political patronage is never a fair measure whether an elected official cares for or respects the Filipino community because they are responsible for the entire population, whether those people supported them. But I would never attempt to explain away the questions that arise just as I would never be a judge in a Filipino scholarship pageant. 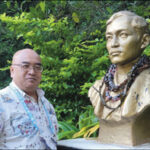