Filipinos are, by nature, joyful, celebrative people. A few years ago the nation’s tourism industry marketed travel in the Philippines with the slogan, “It’s more fun in the Philippines.” The moniker, “land of fiestas,” attached to the Philippines is truly appropriate. The year 2017 included twenty national legal and non-working holidays. March and July were the only months that did not include a national holiday. As well, every barangay in the two thousand inhabited islands celebrate an annual fiesta. When you add birthdays, anniversaries, graduations, weddings, and other celebrations, one can see why it really is “more fun in the Philippines.” Though not without enormous challenges, such as more than a dozen typhoons a year, heavy flooding in low-lying areas during the rainy season, intense heat in the dry season, crushing poverty in many locations, huge overcrowding in urban areas, and horrible traffic in the cities, Filipinos are experts in finding a reason, and a way, to celebrate.

Filipinos are also a highly religious people. The Philippines is known as the only Christian nation in Asia. This is largely based on the high percentage of Filipinos who claim to be Roman Catholic—more than eighty percent. There are also large numbers of Protestant and Evangelical Christian Filipinos too. Some missiologists and sociologists suggest that more than ninety percent of Filipinos are Christians. The influence and impact of religion largely colors every fiesta in the Philippines, especially Christmas.

Filipinos are family-oriented. For most Filipinos, there is absolutely nothing and no one more important than family. Strong familial ties hold people together. For example, if one family member becomes successful, he or she will make significant personal sacrifices to help others “level up.” One of our friends in Manila has personally financed five of her nieces and nephews to get their college educations. This is but one of many examples of the strong family ties among Filipinos. Children are cherished. The aged are honored and respected. Everyone is loved. So these joyful, religious, family-focused people know how to celebrate. And Christmas is their best.

Filipinos love to eat. And if you taste the food here, you’ll know why. Fabulous eats, created especially for Christmas, are spread on most every Filipino table.
Lechon (roasted suckling pig) is the culinary centerpiece at every celebration, fiesta, family event (wedding, birthday), and is also popular around Christmas time. Lechon is prepared by stuffing the inside of the animal with herbs and vegetables. The pigs are slowly roasted, usually by hand-turning over hot coals for hours, until their skin becomes crispy and turns reddish brown, while the inside flesh becomes tender and flavorful. The crispy skin is always a favorite. The dish is often served with a thick liver sauce that is simmered with vinegar, sugar and herbs.

Perhaps the most popular rice delicacy during the Christmas holidays in the Philippines is puto bumbong. Purple rice is steamed in bamboo tubes, stuffed with butter, sugar and coconut, and served with grated coconut and brown sugar (usually muscovado). 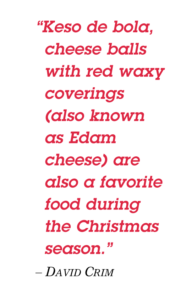 Bibingka, although a year-round favorite, is another important rice delicacy traditional to Christmas celebrations. Sellers of bibingka line the streets during the Christmas season. This rice cake is traditionally cooked in clay pots lined with banana leaves, with hot coals positioned on both top and bottom of the pots as the heat source. Depending on the region, you will find a variety of expressions of this traditional Filipino treat.

If you celebrate Christmas with a Filipino this Christmas, you might also enjoy eating other delicious dishes, such as fruit salad, ham, adobo, pancit, and much more.

Besides traditional foods, there are other traditions that set Christmas in the Philippines apart from any other. Though malls and shops begin playing traditional Christmas carols as soon as the “ber” months start, the religious life shapes many of the Christmas traditions.

Christmas officially begins on December 16. On this day, many people attend the first of nine consecutive pre-dawn masses called Simbang Gabi. Each of the first eight masses start as early as 4:00 a.m. The tradition was introduced by the Spanish friars during colonial days in order to allow farmers to attend mass before starting their work in the fields. Sometimes the masses are called by the Spanish name—Misa de Gallo (“mass of the rooster”). Accompanying the roosters that crow every morning in every village, churches ring their bells, welcoming the faithful through their doors. The last of the nine masses is a midnight mass on Christmas Eve. Simbang Gabi is not just a tradition, the faithful view it as spiritual preparation for Christmas, in celebration of the birth of Jesus Christ. Most people believe that if one completes the whole series of nine Simbang Gabi masses, their wishes will be granted.

Noche Buena (the midnight feast) is like a big, open house celebration with family, friends and neighbors dropping in to wish everyone “Maligayang Pasko” (Merry Christmas). As you might guess, food is in abundance, and usually served buffet style. The traditional fare is available: lechon (of course), rice cakes, barbecue, adobo, fresh fruit and plenty of festive drinks. It is a joyous night, without sleep, a continuous celebration right into Christmas Day. Some families exchange gifts. Some families conduct a talent show, when children are asked to perform a song, play an instrument, recite a poem, or dance. Four words shape the celebration: food, family, fun… and lola. Lola (grandmother) is the endeared matriarch of the family, deeply respected, admired and cherished. In many families, the children line up to receive a gift of coins from lola. The older the child, the more coins received. Christmas Day is often an extended nap, sharing more food, and simply enjoying family.

Belen (the Christmas nativity scene) is often displayed at churches in preparation for the celebration of the birth of Jesus. The Belen includes baby Jesus in a manger, with Mary and Joseph. Shepherds and farm animals are also usually included, as well as the three wise men carrying their gifts to Infant Jesus, and the star of Bethlehem that guided them on their journey.

Feast Day of the Three Kings (also known as Epiphany Sunday) marks the end of Christmas in the Philippines. This feast falls on the first Sunday in January, and commemorates the arrival of the magi from the East, who followed the Christmas star to Bethlehem on their journey to find the newborn King. In Manila, and many other towns too, the day is marked by a parade of three men dressed in costumes, often riding horses, and greeting children and other passers-by. Along the way, they distribute gifts to children. Mass follows, after which parents, children, siblings, relatives, grandchildren, god-parents and friends exchange gifts. The celebration typically lasts for the whole day.

Christmas caroling is popular in the Philippines but with a Filipino flare. Often caroling is a fund-raising effort for a local cause or a church mission. Carolers visit homes in their neighborhoods, where they remain outside and sing traditional Christmas carols. They hope for the family to offer them a donation and to invite them inside for a food and drinks.
These rich traditions that adorn the Filipino Christmas celebration clearly reveal what Filipinos hold most dearly: family and faith. The true essence of Christmas for Filipinos is not gift giving but sharing this special holy day with family.

Decorations are also an important tradition to a Filipino Christmas. The influence of the West has made its impact in the decorations displayed in the Philippines. Many families have Christmas trees decorated with traditional Western lights, ornaments, and such. And though the cost of electricity in the Philippines is not cheap, those who can, will pay the price to decorate their homes, inside and out, with bright, beautiful lights. Christmas cards that illustrate Filipino landscapes are often pinned on red and green ribbons and hung in the sala (living room).
The Parol, however, is the most iconic of all Filipino decorations. The parol evolved from the five-pointed paper star lantern originally crafted in 1908 by Francísco Estanislao. Traditionally, the parol is made of bamboo strips covered with Japanese paper, and illuminated by a candle. The star is a symbol of the three Wise Men and their journey to find the Christ child. Originally, these lanterns were used to light the path along the way to Simbang Gabi. Today, most families either build or buy one to hang by the window or door. Shopping malls construct giant versions of parol. Parols are no longer limited to bamboo, paper and candles. Modern parols come in various designs, shapes, and sizes. Some are simple, while others are loaded with colorful lights. Yet, the parol is still a symbol of Filipino faith

To most Filipinos, Christmas is the most anticipated fiesta of the year and is celebrated accordingly. The splendid climate of this tropical island nation, the abundance and beauty of its flowers, and lovely landscape, its multitude of culinary delights, and above all its warm-hearted people with their true devotion to family and faith all contribute to a holiday celebrated in the true Philippines fiesta tradition.