Since she was in Kindergarten, this Sakada Offspring already knew she wanted to be a teacher. She received her teaching licenses in both Massachusetts and Hawai‘i. She not only became a teacher but also attained her Doctorate Degree in Psychology among other accomplishments. She is also an accomplished pianist and organist. She is none other than Dr. Elizabeth Ayson.

According to sources, Antonio “Tony” Ayson came to Hawai‘i at age 16 and went to work in Waikapū, Maui upon his arrival around 1926 until his employers took him with them to San Francisco. There he worked for several years on the docks with the fishermen to bring in their daily catch.

Before the start of World War II, he moved to Seattle for better pay. When the war started, he decided to return to the Philippines where he worked for the armies, both the Philippine and American, as a mechanic.

At 30 years of age, Tony saw a shy beautiful young lady, a seamstress named Tiburcia Coloma. Tony was very persistent in pursuing to marry Tiburcia even though she was playing hard to get but she eventually agreed to marry him.

Not long after their marriage, the war reached San Nicolas and they were forced to evacuate to the mountains of Baguio where their daughter Elizabeth was born in an Igorot village in a thatched hut with a dirt floor. Two years later, their son Edmund Dante was born, shortly before the war ended.

Life in the Philippines after the war was very hard. In 1946, the Aysons joined with the groups of Filipinos recruited to work at the sugar plantation in Pu‘unēnē, Maui. There, Tony was a mechanic in the tractor shop, fixing gigantic machines. Their daughter Gloria was born a year later.

Tony’s entrepreneurial spirit was nurtured in the plantation villages where he would sell basic goods from his vehicle, eventually opening a small store on his front porch. Moving to Happy Valley provided a larger space and also sparked his talent for building houses. Ambitious Tony attended the Maui Technical School formerly known as Maui Community College, now University of Hawai‘i Maui College. He passed his tests to be a licensed contractor and began his construction business.

Love for books and playing music played an important part of the Ayson family life. The Ayson children were very musically talented. They played piano, organ, trombone, French horn, viola, and even ‘ukulele. Tony and Tiburcia were very supportive parents. They were able to send all their children to college and universities and they were all successful in their chosen fields.

Gloria Ayson, is a teacher of dance, music, and drama for all grade levels, K–6 in one school, Mililani, Hawai‘i. She is also a belly dance performer/teacher in Europe and the Middle East. She is now retired.

Elizabeth Ayson attended Pu‘unēnē School, H.P. Baldwin High School, Class of 1960. She received her Bachelor of Arts, majoring in Education & Music Education from Knox College, Galesburg, Illinois. From the University of Hawai‘i at Mānoa, she received her Masters of Education, specializing in Early Childhood Education. She received her Doctorate degree in Psychology from Union of Graduate School in Cincinnati, Ohio.

From a young age, Elizabeth was a very talented pianist and organist for Sunday services, weddings, funerals, baptisms, christenings etc. She played in churches such as Pu‘unēnē and Pā‘ia Evangelical church, and Wailuku Union Church. Also from a young age, Elizabeth learned how to be a business woman. She was a cashier, stocker, buyer, inventory for her family store and traveling truck vendor in Pu‘unēnē. She was cashier and inventory manager for her family grocery store in Happy Valley. During the summers in 1954–56, she was the office clerk at the Pu‘unēnē School office. In the summers in 1956–60, she worked as office clerk at Baldwin High School, Vice Principal’s Office. During her college years, 1960–64, she even worked as a florist, campus representative, receptionist in a music office, and food service waitress at a school cafeteria as a part-time job. These employments were just stepping stones for Elizabeth’s employment later on in life.

Since she graduated from College in 1964, Elizabeth’s dream as a little girl of becoming an educator became a reality. From 1964–65, she was a teller/clerk/window designer in Cambridge Savings Bank, in Masachusetts. From 1965–69, she was a teacher at Boston City Schools in Masachusetts as well. Then from 1970–77, she was teaching at Blanche Pope Elementary School in Waimānalo, O‘ahu. After that, she decided to move back to Maui and taught at Lihikai School from 1978–1980. In 1980–1983, she became a Vice Principal at Maui High School as well as at Lihikai School from 1983–1985. Then she became Principal of ‘Īao Intermediate School from 1985–2003. During the summers she worked as an Educational Therapist at Queen Lili‘uokalani Center in Honolulu from 1974–1976

Elizabeth wore many hats. Besides being a great educator, she is also a businesswoman, a writer, a publisher, and a consultant. She was an owner/manager of Taco Hut/Taco Lei/Pisa Pizza from 1980–1994. She was editor/writer for the Fil-Am Observer and presently co-publisher/writer for the Fil-Am Voice. She is a consultant—personal empowerment, professional development, community building, from 2003–present.

Since high school, Elizabeth received so many awards and prizes. She was the Salutatorian of her class of 1960 from Baldwin High School. Such a bright student, she received a full scholarship to attend Knox College in Galesburg, Illinois from 1960–64. In 1975, she attended a 10 weeks Summer Internship to study open education in Denmark, Sweden, Germany and England. In 2002, as a principal, she received the invitation from the Masters Group, a think tank in the D.C. area, to bring ‘Īao School students to Washington D.C. to perform chants and songs with Duke Ellington High School Choir and the National Symphony Orchestra, in the nationally televised concert on the West Lawn of the White House to commemorate the anniversary of September 11, 2001. The ‘Īao Peace Team also performed in New York City at the Absynnian Baptist Church with the student choir and in Central Park at the national gathering of indigenous people. In 2002, Elizabeth received the Maui Seasons for Peace Hero Award. In 2012, she was invited to participate in Writers’ Retreat in Hāna for veterans from across the nation, in a ten-day learning experience through meditation, conversation, healthy dining, nature walks and regular sessions of sharing, in circles facilitated by Maxine Hong Kingston, famed author and activist from San Francisco, California.

Besides being a very busy woman, she also has other interests such as: Advocate for the arts, children, world peace, civil rights, advancement of women, small business, support for veterans, Historic preservation of ‘Īao Theatre, Old Maui High School, Wailuku Armory and ‘Īao School. She is also politically engaged in support of candidates at all levels of government. She is an avid reader of biographies and children’s books. For relaxation, she enjoys playing the piano and ‘ukulele, writing, folk dancing, choral singing, and gardening, especially orchids.

Elizabeth’s four children are successful in their own chosen fields. Gavin Aysonwright, her eldest son is a Social Worker in the Hawai‘i State Department of Mental Health. He also works part-time at Marriott Resorts & Spa at Wailea as a Security Staff. He and his wife Malia have a daughter Siana. Malia is a caregiver (part-time) on call at their church. Her second son, Dylan Quirk is a firefighter in the Honolulu Fire Department. He and his wife Mahealani have two children, Ryan and Ka‘ipo. Mahealani works at Kamehameha Schools in Honolulu. Simon Quirk is her third son. He is a firefighter in the Maui Fire Department. He and his wife, Megan have two children, Passion and Aiyana. Megan works at the front desk of the Orchid Fairmont Resorts in Waikoloa, Hawai‘i. Ian Quirk is the youngest of Elizabeth’s children. He is a Mortgage Officer in Honolulu. His fiancée, Aleina Chun is the co-owner/chef–XO Restaurant in Kaimuki, Hawai‘i.

From her heart, Elizabeth gladly and willingly shares her personal reflection: “Love blesses me each day in more ways than I can ever express. Joy and gratitude fill my heart every waking moment, and often in my dreams. Sadness and grieving are balanced with the beauty, grace and surprises of friendships old and new, and hope comes in encounters with smiling faces, quiet laughter, engaging conversations and warm hugs when least expected. Thus, I can begin each morning in wonder and curiosity and ask the question ‘What can I do to help somebody today?’ in the spirit of giving back in service for all the blessings in my life.” 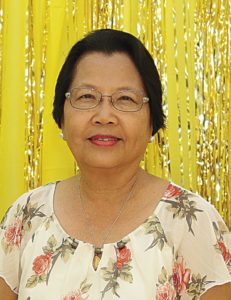