President Ronald Reagan once said “The greatest leader is not necessarily the one who does the greatest things. He is the one that gets the people to do the greatest things.” American Football Coach Vince Lombardi also said this about leaders: “Leaders aren’t born, they are made. And they are made just like anything else, through hard work. And that’s the price we’ll have to pay to achieve that goal, or any goal.”

Pauline Andaya Tiu, a Sakada Offspring truly fits under the descriptions of a good leader as mentioned by President Reagan and Coach Lombardi. She was born at the Maui Memorial Hospital in Wailuku. She attended Kahului Elementary School from Kindergarten thru 8th grade. She graduated from Maui High School in 1981. She received her Associate Degree in Accounting from Maui Community College in 1983. Maui Federal Credit Union, her employer, sent her to Western CUNA Management School (WCMS) and graduated in 2006.

Pauline started in the workforce at age 15 in 1978 while going to high school by working part-time for Andres Rent a Car under the management of Manuel and Zenaida Andres. She then worked for Aloha Rent A Car for two years and in 1980 she worked for National Car Rental until 1984. She also worked at Marsh Company for four years and then at Maui Soda for two years.

In October 21, 2005, at the Valley Isle Chapter International Credit Union Day Dinner, Pauline was awarded the prestigious “Employee of the Year” for the Valley Isle Chapter, Hawai‘i Credit Union League. The award is given annually to the most deserving employee amongst 10 other credit unions on Maui. Pauline was recognized for her outstanding contribution to Maui FCU such as her initiative in going over and above her job responsibilities to serve members, attending voluntary educational sessions a lot of times on weekends and participating in community service projects. The credit union and especially the members are fortunate to have an individual with Pauline’s caliber working on their behalf.

“My professional association spans a short thirty years with Pauline,” says Clayton Fuchigami, President/CEO of Maui FCU. “I first employed her as a clerk/teller and she quickly learned. She demonstrated the business acumen, initiative and leadership skills to be elevated to a supervisor and then her current position as Operations Manager. She is always passionate about doing her job and brings enthusiasm with a positive attitude that is contagious amongst all that work with her. Her work ethic is second to none, which I surmise is from her strong cultural upbringing by her parents who instilled in her the many work qualities and attributes they themselves possessed and she demonstrated to both her superiors and subordinates. Being a people-person, her welcoming personality always radiates with the members she serves. Along this journey, she was recognized not only by the Maui Credit Union Trade Association but by the Hawai‘i Credit Union League (statewide trade association) as Employee of the Year. She successfully completed three intense academic years during the summers attending the Western Credit Union National Association Management School (WCMS) at Pomona College where she graduated from in 2006. The many successes of Maui FCU could not have been accomplished without having Pauline as part of our core management team.”

Pauline is happily married to her husband, Robert “Bobby” Tiu for 36 years. He is the owner of Bob’s Auto Refinishing LLC and Auto Solutions Maui LLC. He was a former employee of Maui Pineapple Company for 22 years. While working for Maui Pineapple Company, he did side jobs out of their home or rented a place where he could do his autobody collision repair and paint. Then in 2010, he decided to establish his own business.

Nathan Tiu graduated from Maui High School in 2002 and attended Maui Community College and graduated with a degree in Auto Body in 2006. He worked at Sears as an auto mechanic then later went on his own to establish his own business in Auto Body as N8’s Auto Kustomz. When the economy crashed in 2008, he joined his dad’s business. Nathan operates Auto Solutions Maui located in Wailuku. Nathan also has a T-shirt business named Headquarters Maui located at Queen Ka‘ahumanu Center with Sacred Ties Tattoo. The business is managed by his fiancé Sabrina Leist. They have two beautiful children. Daughter: Kaila Tiu, 11, who will be attending Maui Waena. Her interest is cheerleading. Their son, Mason, seven, attends Pōmaika‘i Elementary School. He enjoys playing baseball and flag football.

Brittany Tiu graduated from Baldwin High School in 2006. She graduated from Seattle University with a Bachelor of Science in General Science. When she returned home from college, Brittany was employed as a Pharmacy Technician at Longs Drugs in Kula. After two years as a Pharmacy Technician, she joined the family business at Bob’s Auto Refinishing. She manages the operations at Bob’s Auto Refinishing with eight employees under her management. She prepares the estimates for customers and handles the books for both shops. Both Brittany and Ben Carino her significant other have two lovely children. Their daughter Aubrey Carino, four, attends Christ The King Development Center. Their son Greyson Carino is 18 months old.

Jacob Tiu graduated from Maui High School in 2014 and played for the MHS Baseball team. He enjoyed playing baseball since he was a young boy. His passion for baseball led him to the opportunity to travel to many different places on the mainland to participate in tournaments. He played for several different teams from O‘ahu. A highlight of his baseball talent was when he played for MVP a mainland team and traveled to Omaha, Nebraska. In 2011, Jacob was fortunate to watch college baseball games in the brand new TD Ameritrade Park Omaha in Nebraska. He attended the University of Hawai‘i at Hilo and graduated in 2017 with a Bachelor’s degree in Physical Science. Jacob came home and joined the family venture with Bob’s Auto Refinishing. Jacob does the estimates on damaged a vehicles and deals with customer service. Jacob and his significant other Mylene Mochizuki who is employed with Minit Medical moved into their brand new home in November 2019 along with their dog Yasu.

Pauline’s only sibling, Andrew Andaya, Jr. is currently employed for Mahi Pono as a cattle rancher. He is married to Baby Corrales who is employed at Hale Makua. They have three children; Julia “Shine,” Chelsea Mae, and Anson Andaya.

Pauline’s father, Andrew Andaya, Sr., came from Dasay, Narvacan, Ilocos Sur, Philippines. He came to Hawai‘i at age 14 together with an Uncle. They left the Philippines, via Port Salomague, Cabugao, Ilocos Sur, with hopes and dreams for a better life.

Andrew, though he was only 14, proved to be very strong for his age. He worked for Hawaiian Commercial and Sugar Company (HC&S) cutting sugar cane with sharp knives, bundled them up and carried them on his back. There were no machines to do those jobs in those days. With that back breaking job, he was getting paid 75 cents per day. He then became a dump truck driver collecting the rubbish from the sugar mill and from the fields and dumped them in its proper places. He worked in this job until he retired at age 62 in 1974.

In 1961, at age 49, Andrew went back to Dasay, Narvacan to find a wife. He married the love of his life, the former Perlita Valdez. Andrew came back to Hawai‘i to continue his job at HC&S. Perlita followed him to Hawai‘i in 1962. They lived in Alabama Camp in Pu‘unene; for a few years then moved to Kahului in 1964 because the Pu‘unēnē camps were about to be phased out.

Perlita wasted no time in joining the workforce as soon as she arrived on Maui. She worked at the Maui Pine Cannery until 1968 and continued at HC&S until her retirement in 1995. She is a very petite woman but physically strong. She was able to do the hard jobs that HC&S had to offer under the hot sun and rain. Some of the jobs she did were: covered seed (takes care of the young sugarcane plants), drove a tractor, control crew worker (controlled the conveyor for the young cane stalks for planting), and even became an agriculture engineer (installed pipes for drip irrigation). Today, Perlita is instrumental in babysitting her grandchildren and great grandchildren. 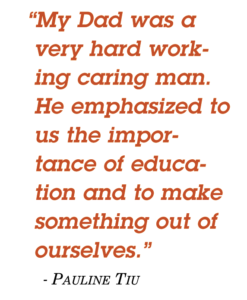 Pauline had these heart warming words to say about her Dad, Andrew. “My Dad was a very hard working caring man. He always wanted the best for us, his children, better than what he ever had himself. He emphasized to us the importance of education and to make something out of ourselves. He was my babysitter when I had Nathan, my first baby. He was such a good husband to my Mom. Because he was already retired when my mom was still working, he cooked our dinner. He was a great cook! He can cook anything, even the best pinapaitan (fresh beef soup dish). I missed his cooking a lot. When my Mom came home from work, he was already done with the cooking for our dinner. I loved my Dad. I was his ‘pet.’ I miss him!”

Besides being busy with her job at the Maui Federal Credit Union, Pauline also attends mass services at Christ The King Catholic Church. She is also a member of the Maui Fil-AM. She enjoys spending quality time with her grandchildren and family, traveling and going on cruises. She is very grateful to God for the many blessings that He has bestowed upon her and her family. She says: “Never take life for granted for you only live once—YOLO—so live life to the fullest.” 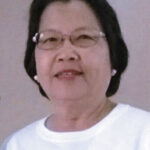