In a few weeks, it will be time.

Yup, I’m talking about Valentine’s Day. Uh huh, where you taking your other half for dinner? Jollibee’s? (If you haven’t heard, they’re now open in Kahului.) In case you’re completely clueless, February 14 is Valentine’s Day and yes, it’s a commercial holiday—cards, flowers (or lei), chocolates, gifts, and dinner. I guess Jollibee’s can be romantic but my suggestion is checking Open Table NOW! to make your reservations … and guys, find a place with awesome desserts—whether it’s halo halo, Kona mud pie topped with Screwball, or my favorite, soufflés! (IMHO, the best soufflé is the Grand Marnier souffle from Four Seasons that is off the menu and requires a twenty-four hour reservation.)

And then again, there are several of us, who were not successful the first time around but Love is better the second time around. (Oh yeah, I’m aware of a few who have had multiple attempts.) I’m sure the Hallmark Channel will feature quite a few of the second marriage love stories in the next few days.

When Nora Cabanilla moved to California for school in 1978, little did she expect that she would meet her future husband—a Maui boy—in California through her blonde, blue eyed sorority sister. Her sorority sister invited Nora to her dad’s 50th birthday party because she wanted Nora to meet her cousin, who would pick her up. “On the day of the party, the door bell rang and I looked through the peep hole. I told myself I was not going and would pretend I wasn’t home,” said Cabanilla. “I was so scared because there was this 5’ 8″, 235 pounds, local boy with a full on beard (like Santa) and a dark tan—and he was wearing shorts, a tank top t-shirt, and rubba slippas while I was decked out in a nice dress. But he looked at me and reassured me with a smile I wasn’t overdressed, saying ‘Nah, no need you okay.’”

Cabanilla’s fears increased when she saw his vehicle—a van. “I stopped walking and refused to go with him, thinking ‘Oh, my God. I’m going to die … in LA!’ But he opened the door, held my hands to help me and I felt something different—he was warm and gentle like a brother. We talked about Maui and he knew my cousin Lawrence who owned the service station in Lahaina and I learned he, Craig Takushi, went to Maui High School with my cousins. At the party, Craig never ignored me or left me alone with strangers, he watched over me like a big brother.”

In the 70s local music artists like Cecilio & Kapono and Kalapana would bring locals together to appreciate their Hawai‘i roots. Nora and Craig learned that both loved Cecilio & Kapono so Nora felt safe and comfortable with Craig. And when Craig brought Nora home, Craig gave Nora a hug—normal for local kids—and a kiss! “He gave me a kiss not on my cheeks but on my lips and I was furious,” recalls Nora, thinking Craig had guts to do that. Nora rushed out without even saying good night. “Craig did call the next day to apologize, saying he usually doesn’t do that kind of stuff but he couldn’t help himself that night,” said Nora. “And that was the beginning of our friendship which included dinners with friends, giving me rides to the airport when I came home, going bowling, and we even went to a C&K concert.”

Craig developed feelings for Nora and told Nora’s friend Nilda that Craig had feelings for Nora but he remembered what Nora had told him, albeit Nora doesn’t recall saying “I don’t date local boys.” Craig returned home to Maui after four years while Nora stayed in California. They would see each other during the summer or Christmas, hang out on occasion, or see each other at the Foxy Lady disco in the Royal Lahaina Hotel. “I would see him with his friends and he would come over to talk me and give me a hug but no kiss because he was with someone,” says Nora. “I was happy for him but a little sad because I lost a good friend. Years later, I came home to get married and found out Craig was going through a divorce.”

Ten years later, Nora had a life change herself, and was a single mother with two beautiful girls when lo and behold she ran into her best friend. “It was like a reunion because it felt like we never lost touch. He was there again, like a brother, that year I lost my Dad too, so it was a difficult time for me but Craig would call, we would stay up all night talking on the phone and he would hear me crying. The next day, I received a beautiful floral arrangement at school that said ‘Just to brighten your day. Love, Craig.’ I smiled and thanked the Lord for sending me a good friend.” Craig and Nora would rekindle their friendship by going to dinner at Chart House in Lahaina to catch up. Nora still considered Craig like a brother and even told Craig about her dates with other guys while Craig would tell her “Just be careful please.”

Two years later, Craig finally told Nora how he felt about her and again, Nora said NO. “I didn’t want to lose that friendship we had but he didn’t give up. He even broke up with his girlfriend. But he came around, spent time with me and my girls at hula, cheerleading, school activities, and even attended family gatherings,” recalls Nora. And their friendship led to their marriage on November 25, 2000.

“It was Thanksgiving Day,” says Nora. “I gained a beautiful son Kekoa, with my two girls Nichole and Kristina. We did everything together like a normal family. Of course all marriages have their difficult times but when we hear the song ‘God gave me You,’ we just look at each other and I would ask Craig to dance with me. And he would whisper, ‘Thank you for loving me’ and I would replay ‘Thank you Lord for sending this special man into our lives.’” Craig and Nora’s family now include six grandchildren: Kekoa (16), Luke (11), Aiden (11), Aubree (7), Austin (5), and Amira (2.5), who they enjoy hanging out with, camping in the living room, and attending Sunday mass with them.

“Craig and I just completed our Marriage Weekend retreat last November and one of the dialogues we had to listen to the song ‘If tomorrow never come’. We both cried and danced and switched to the song ‘Look at us.’ We’re still leaning on each other and Craig has been supporting me with all my community, church, and school activities.”

I don’t know about you guys but Nora and Craig’s love story is fit for a Hallmark Movie. 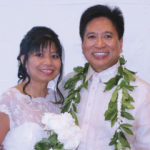